Veins is located in a canyon in the southern part of the country near the dangerous Volcano Thor. The local geologist is studying the Volcano, and may be in need of assistance from passing adventurers. The town is famous for its wonderfully smelling soap.

Little is known about the new continent of Arunafeltz, aside from its capital city of Rachel. Most of this vast expanse of land remains shrouded in mystery...

Upon th opening of the gates of Rachel, it's trade and economy boomed thus increasing the number of travelers and merchants in the city. One such merchant while staying in Rachel heard of a valuable mineral which was black as a beetle, but when exposed to direct sunlight shone brightly with many different colors just like an opal. This mineral called 'Hetarium' was said to only be found in the southernmost lands of the continent of Arunafeltz, and so the young and ambitious merchant driven by curiosity and opportunity led a small expedition south seeking the famed stone.

After days of tiresome traveling and fending off monsters, the young merchant was starting to lose hope. Maybe this 'Hetarium' was just merely hoax... or a myth at best... but just then, he noticed at the corner of his eye something that seemed to be a town within a canyon.

Was it all just an illusion?

Could such a thing even exist?

As he and his party journeyed closer, he realized that what he saw was indeed real.

Before him and his companions was a busy village embedded within the canyons. There was an incomparable hustle and bustle within this town as just about everyone seemed busy. Then the merchant spied two people holding up some kind of jewel... even from afar, he could tell that it was black but at the same time, it radiated various colors under the sunlight...this was it! This was the Hetarium he was searching for!

As he started to go into the village, he and his companions were met by a guard, who smiled and greeted them...

"Welcome to the Canyon Village of Veins!"

Quests added with the Veins update can be found here. 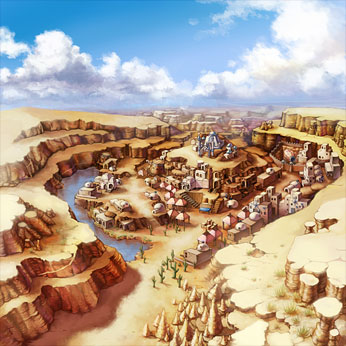 Walking seems to be the only way by which adventurers can visit Veins for the first time. the town grew far too quickly to develop an Airship line or install the Kafra Warp Service for all of the new migrants. Starting from Rachel, adventurers can head one field south, one field west, and then travel two fields south to reach Veins. There aren’t too many dangerous monsters between Rachel and Veins, but the fourth, final field in Veins is home to aggressive beasts such as the Desert Wolves, Roween and Gallion. Beware their bestial ferocity!

Jonda Plain provides players with a Storage and Save Point service in Veins, allowing them to save their Save Points in or near town. Adventurers planning to travel between Veins and Rachel should save their Respawn Point in Veins, and Acolyte Class characters may want to save their Warp Portal Memo Point there.

According to legend, Thor fought a fierce battle with evil fire spirits and hammered them down with such force that the earth itself was wounded and shed burning blood, thus creating Thor Volcano. No one can ascertain the truth of this story, but it is quite believable: the volcano's caves are teeming with mysterious fire spirit monsters that attack adventurers that may be seeking shelter from the rain and typhoons outside.

When the Hetarium craze erupted in Veins, the fire spirits in Thor Volcano suddenly grew much stronger and aggressive. Many people were killed by their wrathful flames, and so the people of Veins blocked the main entrance to the Thor Volcano caves. Although it is prohibited to enter the volcanic caves, a young boy reported that he had seen some uniformed men going in and out of Thor Volcano. The Veins consul dispatched an investigation team to check the boy's claim, but could not find a way to enter Thor Volcano. Are these events related to the sudden rush for Hetarium? What could be going on in Thor Volcano? If evil is afoot, then the Rune-Midgarts adventurers must be there to stamp it out!

The Thor Volcano is located in the 3rd field of Veins and is composed of 3 levels. It is difficult to reach this dungeon from Rune-Midgarts since it is between Rachel and Veins, but any adventurer is able to enter. Acolyte Class players can register Warp Memo Points in any of the fields in Veins, making it a little easier to access this distant dungeon.

Aside from the Kahos, all the monsters in Thor Volcano are new additions in Ragnarok Online Episode 11.2. Most of these fiends are Fire attribute and Boss type monsters: Thor Volcano might be a little easier than the Biolab, but it will still challenge the most battle hardened players.