Geffen is the city of magic. It is home to the Mage and Wizard guilds. Its most prominent feature is the looming Geffen tower, in the middle of town.

Geffen is located on the west side of the Mt. Mjolnir range. Word has it that the city was built by great Wizards of the past as they believed and in magic. The Wizard Magic Academy is located at the center and the Mage Guild is located on the outskirts of the city. It is an ideal place to gather all different sorts of magic equipment. Even until now, the city`s lights are always on as there are many who research and develop more magic. It is also near the Glast Heim Castle where it is said to have housed gods a long time ago. 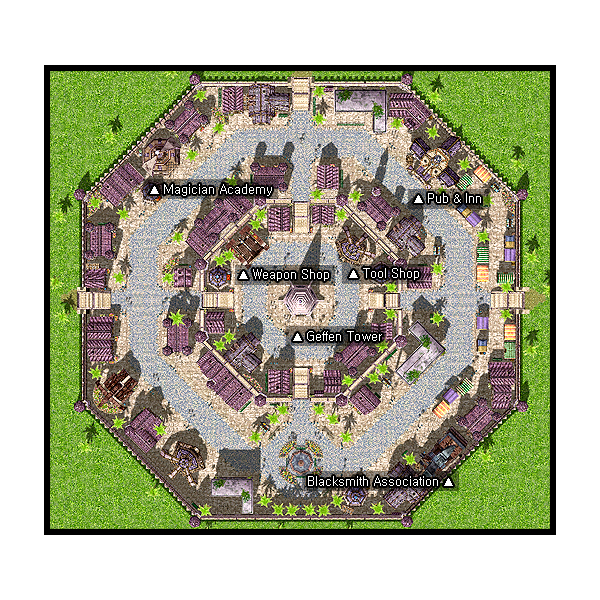 A medium-sized dungeon of four maps lies below Geffen. It can be accessed by going down the stairs in Geffen Tower, in the center of the city.

A small dungeon South of Geffen that is rabidly infested with undead Orcs. It is located in the Northwest corner of (-4,-1) on the world map. There is also a second entrance (which leads to level B2 of the Orc Dungeon) slightly north-east of the center of the same map. The Geffen Kafra employees will teleport you there for 1700z.

Known as the Forbidden City, Glast Heim is located (-7,2) on the world map, one world map square north and three squares west of Geffen. Consisting of a massive sixteen maps, it is the largest dungeon in the game. Based off the Norse Mythology: Glaðsheimr. If Cool Corp. has won the Dungeon Teleport Election, then Cool Corp. employees can teleport you to the entrance for a ???z fee.

Geffenia is a subterranean dungeon sealed by the magic of the Geffen Tower and Geffen Fountain. This new dungeon is composed of 4 maps, each with its own beautiful and enchanting scenery. Within it resides a vast array of powerful monsters, some of which are found only there. In order to gain access to the dungeon, one must first acquire Lucifer's Lament, a gem that can be obtained through the Sign Quest.