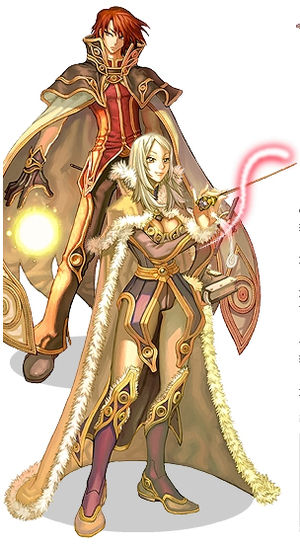 Wizards are powerful offensive magic users. They rely on dangerous magic strikes as well as devastating Area of Effect spells to wreak havoc.

Changing into a Wizard from a Mage requires the player to complete a number of tasks:

After completing these tests, the player will be transformed into a Wizard. This takes place inside of the Geffen Tower.

There are a large variety of builds in terms of skills. In terms of stats however, there is freedom for originality besides using a melee build, which is unusual. Most Wizards have 99 DEX then varying levels of INT and VIT, depending on what their character have been built for.

Melee Wizards are rare and probably stem from the fact that they can use Berserk Potions and a Dagger of Counter (+90 CRIT). Additionally, Quagmire makes dodging and hitting monsters much easier. They are rare builds that are for fun more than for practical use.

These Wizards can level solo or, as they more commonly are, be joined by a Priest or an entire party. Generally, the Priest will mob up monsters, Heal themselves and use Suffragium on you, reducing the cast time of a single AoE skill - such as Storm Gust or Meteor Storm. If you're levelling solo, you'll need to learn how to use Vertical Fire Wall. Many builds go for more VIT and less INT, as seen in the WoE/PvP section.

In order to take part in WoE or even PvP, Wizards require VIT to avoid dying quickly and to resist Status Effects. Safety Wall, Stone Curse, Fire Bolt and varying levels of Jupitel Thunder and Storm Gust are popular weapons for Wizards in PvP. In WoE, Storm Gust and Meteor Storm are mainly used in precasts. Leftover stat points are dumped into STR for the single purpose to raise the Weight Limit. This can also be considered upon reaching high VIT, where a Wizard might decide holding more Potions is more effective than having higher HP or Status Effect resistence.

Beware that opponents can easily resist Wizard skills with elemental armors and others (i.e. unfrozen) and MDEF. Players equipped with such can easily counter the damage from Storm Gust level 10. In these cases, try linking freezing techniques with Jupitel Thunder level 10 and Stone Curse with Fire Bolt level 10. Also, use various different elemental attacks if you suspect your opponent is switching armors to counter you. For example, if the damage of Jupitel Thunder is oddly low, the opponent may have equipped a Wind armor, so use Fire Bolt on them or an Earth attack instead.

Whatever is chosen to wield in the right hand, it should always be a rod type weapon, as they all provide +15% MATK.

INT Rods: (If INT is greater than DEX)

DEX Rods: (If DEX is greater than INT)

More DEX is usually better, but sometimes getting more INT to attain the next MATK bonus (occuring every 5 and 7 points of INT) is more desirable. The Staff [3] and Arc Wand [2] provide the most, although mixed, stat points for non-battle ground items.

The slotted Survivors Rods are desirable Wizard weapons. In the INT variant, one stat points is sacrificed for 400 HP. The DEX version is basically a Quadruple Dexterous Rod with an extra 400 HP. The non-slotted Survivors Rods are a viable alternative for lower level Mages and Wizard, but they do not offer enough stat points for higher level Wizards.

The player should have multiple shields with "racial cards" - cards which resist respect races by 30%. For example, if they were to level in High Orcs or enter a PvP area, they should equip a Cranial shield (Thara Frog card) to reduce damage received from Demi-Humans (i.e. High Orcs or other players) by 30%.

While racial guards are vital, it may be difficult to acquire all of the necessary ones immediately. Some players choose to get a Rigid Guard (Thiefbug Egg card, +400 HP) for use in the places they do not yet have the appropriate racial guard for.

Accessories: Some accessories that are helpful in leveling or PvP situations.

Below are listed the skills that are unique to the Wizard class. For more information about Mage skills, click here.

Wizards can use Concentration, Awakening and Berserk Potions.