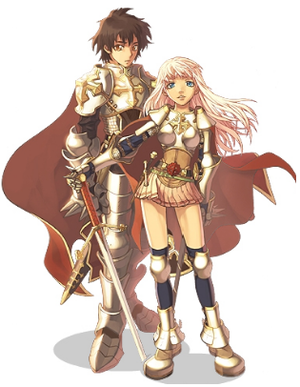 Lord Knights are the Transcendent variants of Knights. The Lord Knight's skills are a good balance of offense and defense. The Lord Knight is now a master of weapons with a special affinity for Two-handed Swords and Spears. A Lord Knight has formidable attack strength and can crush an opponent's defense with ease. Being a Lord Knight, they gain vastly improved offensive capabilities and some defensive capabilities. They easily retain their status as the class with the highest HP Modifier and strongest physical AoE damage dealer.

Lord Knights get the most new skills of the Transcendent Classes: two skills that enhance their damage output, and three skills that deal damage and various status effects. If this isn't enough, they also get (beside the +25% HP) a skill that gives them on-par tanking ability to that of Crusaders in the form of Parry. Their ability to go Berserk unleashes massive damage while in a state of Frenzy. A number of defensive skills complement the Lord Knight's combat mastery.

To become a Lord Knight, you must find a book called 'the Book of Ymir' in 'Sage Castle', Juno. The book will lead you to Valhalla so you can change your job through the Lord Knight job NPC. Also you must reach at least job level 40 as a transcendent 1st class character.

The standard leveling and WoE build for LKs, this build focuses on high HP and average DPS. Bowling Bash is moderately spammable.

This build will easily top 25k HP, making them extremely difficult to kill. They primarily use Demi-Human resistance gears and a Status Pike, such as a Quadruple Sleep Pike. If a guild has enough Lord Knights, multiple DPS Knights can apply severe pressure to a guild.

The card here is up to you. A decent choice would be Giearth Card for Confusion immunity.

Carded with a Nightmare Card for Sleep immunity.

Carded with a Thara Frog Card.

Use a VIT or DEX or STR enchantment, carded with an Evil Druid Card.

Carded with a Raydric Card.

Carded with a Green Ferus Card.

For the damage, HP, and stun chance.

A slightly more ASPD dependent build for LKs, generally not being stun immune (though it's an option) and suffering slightly in DEX or STR in exchange for ASPD, they are extremely efficient levelers.

This build mainly relies on their insane ASPD and Twohand Quicken for ctrl-click meleeing. They can attain superb flee and utilize the skill Parry for defensive purposes.

This is a special build that relies on the usage of the weapon called Muramasa. Because the Muramasa curses the wielder randomly, if the player has one more point of total LUK than their baselevel, the curse effect can be negated. Although this build is not too common on iRO, it is such on kRO and certain other servers. An alternative to use Muramasa would be to use Holy Waters when one gets cursed instead of using this build.

Pierce is still a solid strategy for killing MvPs, in combination with Spear Dynamo for +50 HIT and +25% damage. Frenzy is used on many weaker MvPs with a good Two-Handed Sword. An LK in Frenzy could easily hit upwards of 3k with 190 ASPD, making many low HP MvPs melt. Bowling Bash is still good for mob control.

Bowling Bash remains the standard skill for a Lord Knight, with Spear Dynamo and Aura Blade increasing its damage further. Provoke can be used on caster classes to cancel their casts. Clashing Spiral can be used in Magic Strings to hitlock opponents and deal decent damage.

Their role is largely the same as a Knight. Frenzy for Emperium Breaking is ill-advised as you lose all of your ability to heal yourself, however for uncontested emperiums Frenzy makes your break speed extremely fast.

Clashing Spiral now adds an additional meaningful weapon type: Heavy Spears. Since the damage is based off of Weapon Weight, the heavier the better. Otherwise, equipment isn't much changed from Knights.

The levels at which a Lord Knight receives a certain bonus.