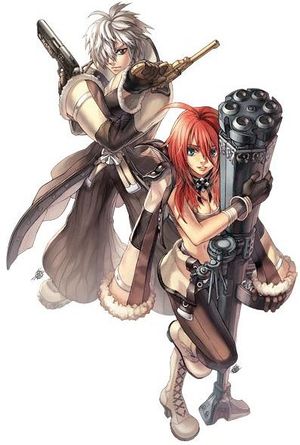 Gunslingers are flashy and confident New Age warriors that rely on a wide array of guns and powerful skills to deal as much damage as possible in a short amount of time to their enemies. Gunslingers are always looking for a chance to show off their talent.

Bored with only target practice in smoggy Einbroch, gunslingers have decided to take up adventuring, like so many from the Rune-Midgarts Kingdom, in order to live a life of excitement and fame.

Unlike traditional classes, Gunslingers do not have a second class to change to (As of yet), but instead are allowed 70 job levels. This can allow for a range of very unique (hybrid and specialized) skill sets in the Gunslinger tree.

This page has been marked as being in need of links to other iRO Wiki pages.

These gunslingers typically use revolvers to gain a higher ASPD. They deal a limited amount of damage due to the handguns' lower attack power, but with the higher ASPD they can still kill enemies faster (and aided by the skill Chain Action). Another good thing about Dex/Agi builds is that they have a high Flee rate.

This build is a very similar in the play style to a Grand Cross Crusader. Their goal is to gather a mob and quickly kill it with Desperado. Advantages over GC Saders include: no problem with stacked monsters (the mob can be as big as you can safely make it), the potential damage output is far higher with the properly carded weapon (2s Garrison), and access to endows and different weapons that can be used to level almost anywhere that is mobby (Niff2, GH maps, CT HOs, Geffen Dungeon, Geffenia, Thanatos, etc). Disadvantages include a much lower HP modifier (VIT is needed to survive as mobs swarm), lack of a Heal skill (a full support is very much needed at harder maps), and no peco (mobbing on foot w/o Endure is not as easy).

A pure build will have base stats that look something like this:

Gear for this build would include:

An Ulle's Cap and Odin's Blessing may be useful for their 10% reduction in the SP cost of skills, lowering the cost of Desperado from 50 down to 45.

untested: damage increase by using Last Stand right before using Desperado on a mob for 100 more base attack

An awkward build who's role is reliant on actual luck. This build makes use of the skill Triple Action with the Grenade Launcher type guns. This is similar to Monks and Champions using their skill Throw Spirit Sphere but instead it deals three hits with each coin. Benefits of this build is the ability to bypass ammunition restriction (Ex. able to shot silver bullet with launcher which also carrying the holy property to the shot) and dealing 10 rows of massive damage with each that is roughly 2/3 from the skill Trigger Happy Shot (damage can also be further increased by using the skill Last Stand). The drawback is that the DPS (Damage Per Second) is not very stable, as you require actual luck to get coins back with the skill Coin Flip. To make things easier, since the coin flip cast delay is ASPD based, it is wise to use a berserk potion and equip a shield to speed up the process of getting 10 coins back. (The shield can be hotkeyed to quickly de-equip the slow ASPD gun.) NOTE: only through using triple action can bypass the ammunition restriction, if you want to use the skill Gunslinger Mine you MUST switch your ammunition back to grenade type, vise versa to the other guns with their corresponding skills

As the named suggests this build makes use of the weapon Lever Action Rifle to maximize damage and critical shots, combined with 2 Drosera Cards and sometimes with the skill Last Stand through requiring as little Luk as possible (with a result of roughly 90 ~ 95 base critical ratio). As a critical attack build, active skill usage is not recommended as the critical attack usually does not carry over to the skill damage itself, thus int can remain as low as it can. Due to the rifle having a -5% ASPD penalty, it would be wise to use berserk potion, and to either invest in some ASPD boosting equipments or AGI to make up for it. Although ultimately the -5% will not have a hefty effect on your overall lethality, due to the potential high single hit damage of the lever action build.

Gunslingers can use five different types of guns in order to attack and defeat their enemies. While any Gunslinger can use any type of gun, only certain skills can be used with each type of gun available. All guns are two-handed, so Gunslingers can't make use of shields unless they remove their weapon. Their selection of weapons is considered to be the worst in the game, having no options for a 1-handed weapon, no 4-slotted weapons, and only a single 3-slotted weapon, which is not usable with their most damaging skills.

Normally the defacto weapon for Gunslingers, the pistol allows for faster attack speed at a cost of lower Hit and Attack. Available pistols include the following:

Rifles are stronger than pistols and can come with a Hit and Crit bonuses. However, they are slower and are limited in the skills they can work with. Available rifles include the following:

In theory, these electro-mechanical weapons are nearly the same in comparison to pistols. But with the right combination of skills, AGI, and DEX, the elusive attack speed of 190 can be reached along with a much higher attack. Available gatling guns include the following:

Shotguns are powerful, pump action weapons that provide splash damage on normal attacks, but at the cost of a very slow attack speed. Available shotguns include the following:

These monsters pack some of the highest base attack in the game, and allow the use of elemental bullets called "spheres". They have the same slow attack speed of shotguns and have only one specialized skill available to them, but they can break armor at close range. Available grenade launchers include the following:

Gunslingers can only wear armor that states that it can be worn by all, or all except novice. With Battlegrounds, Gunslingers also get exclusive use of the following:

Currently, Gunslingers can wear any headgear that is wearable by archer class characters, with the exception of caps, goggles, and binoculars.

Gunslingers cannot use shields while equipped with guns, but if they wish, they can remove the weapon and wear a guard.

Gunslingers can use any footwear equippable by archer class characters. With Battlegrounds, Gunslingers also get exclusive use of the following:

Gunslingers can use any garment that can be worn by archer characters. With Battlegrounds, Gunslingers also get exclusive use of the following:

Gunslingers can use any accessory that can be worn by non-trans characters. With Battlegrounds, Gunslingers also get exclusive use of the following:

The bonus to stats given for each job level are listen in the below table.