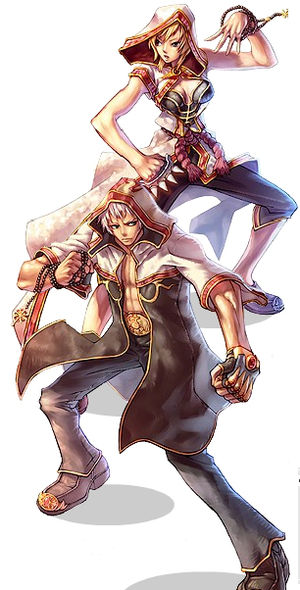 Monks are a versatile class that can deal damage in several ways unique to themselves. They are most known for the powerful Guillotine Fist skill, which has uses in MVP, PVP and WoE scenarios. Most builds are damage-dealers, focusing on maximizing damage via skills such as Occult Impaction and their Combo abilities. Specialized Monk builds can be very efficient for MVP and WoE purposes.

Changing into a Monk from an Acolyte requires the player to complete a number of tasks:

After completing these tests, the player will be transformed into a Monk. All of this takes place at the Monk Abbey (prt_monk).

A made to survive Monk build suitable for WoE under precasts and Dazzler spams. With slightly lower DEX and INT (SP Issues replaced by high ranking gears) this build generally gets the job done better, and lets the user live longer overall in WoE.

Generally this build type is best supported with nicer, very expensive gears to make up for the SP shortcomings and further add to your lifespan. Because Guillotine Fist's damage is reduced in WoE, players need high STR and sometimes a bit of INT to ensure their Guillotine Fist will kill people in one shot. With this VIT, as a Monk you can use your snap skill amazingly in WoE through and past precasts. Great for Advanced WoE addicted players.

Common Monk bread and butter build. This is also usable in WoE, but there is an another build that can be used in WoE that is made to kill those Ghostring Armor wearing players, but that's another story.

This stat build is the most flexible and dubbed superior over the other since this combination will further more exploit the flexibility of the Monk class. You won't rely on Guillotine Fist alone, because of the DEX amount, you can do fast cast Throw Spirit Sphere also or Occult Impaction. Disabling other Monk class is also possible due to the reduced cast time of Spiritual Sphere Absorption.

There is a high preference for 120 STR in this type of build as well as a high INT score in order to deal massive amounts of damage with the Guillotine Fist skill.

High INT allows for a long-lasting supply of SP while leveling, allowing the Monk to make up slower leveling speed due to lower DEX with the benefit of having to sit and regen SP far less than other monks (and may not even need the benefit of a Priest). High INT builds will also find the have an easier time using Guillotine Fist continuously in Bio Labs.

Mostly made for solo leveling fun, this build's aim is not the Guillotine Fist damage, but the ASPD and massive combo skill damages.

AGI and STR is prioritized for higher damage per second, INT is almost for SP regen and count while DEX is for Hit or even Guillotine Fist cast time if one plans to have it.

Regardless of its PvM approach, this stat combination could also compete with the other builds and thus Full Combo-Asura builds are born which fuses the most damaging combo skills and Guillotine Fist.

Combines both the best of both the Spirit and Combo build into one. This build aims to balance the stats so that it is more stable when situations demands a certain task. With the potential to unleash a Deadly Guillotine Fist and still maintain Combos and Spirit Skills, a Hybrid Monk is ready to adapt to a crisis in a matter of seconds.

Due to the fact that the status points are allocated into every Stat (with the exeption of luk). This opens the skill tree to a whole other level. Snap can be used effectivly with this build with the assumption of maxing Occult Impaction as the Mastered Skill. Other skill builds such as maxing Buffs, Heal, and Spirit Skills but ignoring Combos is also an option.

PvM Combo Monk skills: All PvP & Woe skills plus the combo skills if player has the skills.

These are some tricks that can aid players in battle or make the player enjoy being a monk more. The first 3 tricks are seen / heard in-game.

How to Do it:
While doing occult impaction, clicking on any unoccupied cell (preferably next to you or the enemy) right before casting ends. (With good dex, clicking right after the cast begins usually makes it work)
Purpose: Bypass the after-skill delay. so you can do other things quicker (ex/ another occult). May require some practice.

How to Do it:
Use snap on the cell the player is standing on. Then hotkey /doridori and /bangbang (or /bingbing) and press them alternately.
Purpose:
None other than the player's sprite will do awkward actions while spinning.

How to do it:
While fighting just use Summon Spirit Sphere, and player will stop attacking (normal Melee attack) immediately.
Purpose:
When attacking a monster, it is sometimes hard to stop the attack. Especially if player accidentally KS a monster.

How to do it:
Cast Fury than Mental Strength.
Purpose:
While MvPing as a tank, when Mental Strength timed out, player can use Snap immediately without any spheres. Rinse and repeat and go back to the MvP. This trick negates the need for Fly wings or the teleport skill anymore because this trick is way more efficient than to teleport and find the MvP to tank it again.

How to do it:
Cast Pneuma on Guillotine Fist target's cell (directly on the target).
Purpose:
Disable target's ability to cast Safety Wall on himself.

Using the skill Summon Spirit Sphere, a monk can summon a number of spirit spheres. At most one can have 5 spirits. Each of them can be used for various skils. They will also prevent it's owner's attacks from missing, as each adds 3 damage that won't miss.

Remember to replenish spirit spheres when they expire. Spheres will remain even after death; however, reloging or disconnects will rob a character of their spheres, so it is needed to summon them again.

Using the quest-gained skill Spiritual Bestowment, a monk can transfer his spirit spheres to another character of the same party (with the exception for Gunslinger class, who can't receive Spheres since they have "Coins" as their Spheres). The spheres will have the same effect on any job apart from Gunslinger who can't receive them. Spheres can also be obtained through the Greatest General card.

Monks are known for their combo skills; a row of attacks that occur in a sequence.

After each combo skill, there is a delay period. During this period, the user can trigger the next skill in the sequence. Use the following calculations to find out the delay period: 1.3 - [(AGI*0.004) - (DEX*0.002)] seconds. Make sure the right hotkey is hit at the right time, and the next combo will trigger. For Raging Quadruple Blow and Raging Thrust, as they can't be triggered in any other method aside from a combo (or Root), the user can simply spam the hotkey once the previous skill triggers.

If a monk would like to use Guillotine Fist at the end of a combo, he must be in a Fury condition and have 5 spirit spheres, before starting the combo sequence. While Guillotine usually needs 5 spirits, through the combo it is possible to use even with the 4 left after Raging Thrust. In this style, Guillotine Fist is used without a cast period, removing that weakness of the skill. However, since a small amount of SP is used to trigger the combo skills as well, the damage will be lower than a direct cast.

Tip: when chaining Guillotine Fist in a combo, it is only necessary press the hotkey once. Since it is usually a single-target skill, if it is pressed multiple times, the Guillotine will cancel and nothing will happen. For this reason, it is needed to concentrate and it cannot be spammed like with Raging Quadruple Blow and Raging Thrust. Remember, the delay starts after the Raging Thrust animation is complete. Try pressing the hotkey immediately after seeing the damage from Raging Thrust appear.

Later, as a Champion, there will be many more possible combo sequences.

(Waste Stove may or may not be implemented into your version of RO yet. It grants +10% to Guillotine Fist damage when equipped with a certain set of cards.)

The Levels in which you receive a certain bonus