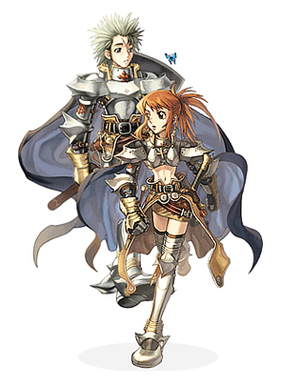 Do you believe in the gods? Witness the Paladin's might and see the power of the divine for yourself! Non-believers are sure to convert and sinners will repent! The Paladin is a shining symbol of piety and devotion who uses his fighting ability in the service of the gods and his fellow man. His skills can punish the wicked or inspire the faithful.

Paladins are the Transcendent variant of the Crusader class. Aside from the HP/SP boost, the Paladin's defensive capabilities have not seen significant changes. They do receive many new offensive abilities which inspiring many INT-built Crusaders to become battle-built Paladins. For those Paladins who wish to continue as an INT-type build, the Battle Chant skill allows them to play a supportive role in large party settings, and the 20 additional skills points allow them to learn a much wider variety of skills.

To become a Paladin, you must find a book called 'the Book of Ymir' in 'Sage Castle', Juno. The book will lead you to Valhalla so you can change your job through the Paladin job NPC. Also you must reach at least job level 40 as a transcendent 1st class character.

Essentially, nothing more than a standard Grand Cross Crusader taking advantage of the additional skill points and 30% HP/SP bonus to max out their defensive skills. Still built for PvM, this build revolves around forming huge mobs and either tanking them for a Wizard / ME Priest (benefiting from Guard, Divine Protection, and Heal) or obliterating them with Grand Cross.

All stat with priest buffs.

This is a PVM build that aims for MAX ASPD (190) to auto cast heal on the character while attacking. This build focus more on counter attacking (Shield Reflect) and defensive tactic (auto cast Heal, Guard, Defending Aura), rather than being highly offensive as their Lord Knight counterpart (see Lord Knight's Build: The Speedfreak). This build would be more ideal for monster that do not have high defense, deal high damage or high hit. With the counter attacking and defensive tactic, this allows the player to hunt non-stop as there is no need to rest (usually Heal, Guard and Defender Aura will take care of the damage received and Shield Reflect helps bring the mob down). The downside to this build are low HP, low damage, limited equipment choice, and priest buff dependent.

Finally, for Grand Cross Crusaders who have longed to obtain both Heal and Sacrifice can now do so. This build revolves around spending the 20 extra skills points on Heal, Sacrifice, and Battle Chant to whatever balance floats their boat. Effective in many PvM/MvP situations, and useful in WoE, where the FS Paladin's high INT and moderate DEX make their Grand Cross formidable, and where their wide array of supportive skills will make them very popular with Wizards and Sages.

Devastating in PvP and WoE, the Gloria Domini Paladin uses a heavy balance of DEX to pull off a Sacrifice for their Wizard or Sage in even the most hectic of situations. The same DEX is also used to turn Grand Cross into a deadly and surprising weapon, and allows them to use Gloria Domini to cripple their opponents from afar. With a little help from Magic Strings, a Gloria Domini + Sacrifice Paladin in the precast can be a serious problem for enemy Priests, Wizards,Ninjas,Snipers, and Crusaders, who watch helplessly as their SP disappears. With the aid of a Minstrel's Bragis Poem, it can kill low HP classes in just a matter of seconds.

The ultimate tank of the game. This Paladin pulls off a combination of the protective shield skills along with high VIT to guarantee survival. Martyr's Reckoning can be used to annihilate any monster or player without reduction gears. Rapid Smiting can be spammed on those who do carry them. This build can pull off the dangerous combo by hitting with Martyr's Reckoning while it is in the Rapid Smiting cool down. Defending Aura eliminates the threat of ranged attackers, while Shield Reflect makes sure that any Assassin or Knight who tries to sneak up on you will not get away without heavily damaging themselves as well. Outside of WoE, Shrink bounces back any foolish player or monster who's planning to get a quick kill on you. In case you confront a Wizard, Shield Boomerang will take care of them momentarily. The one major undeniable weakness of this type is that they are vulnerable to Full Divestment and Divest Shield. Considering the high DEX of the build though, most Rogues and Stalkers will find it hard to strip you.

Also the ultimate tank of the game. This Paladin pulls off a combination of the protective shield skills along with high VIT to guarantee survival. Martyr's Reckoning can be used to annihilate any monster or player without reduction gears. Defending Aura eliminates the threat of ranged attackers, while Shield Reflect makes sure that any Assassin or Knight who tries to sneak up on you will not get away without heavily damaging themselves as well.Outside of WoE, Shrink bounces back any foolish player or monster who's planning to get a quick kill on you. In case you confront a Wizard, Provoke is the best choice to momentarily take care of them due to it's faster spam rate than the paladin's other ranged skills. One major undeniable weakness of this type is that they are vulnerable to Full Divestment and Divest Shield. Also this build will be utilizing mastela fruits or slim white potions due to the limited weight capacity. Considering the moderate or high DEX of the build, most Rogues and Stalkers will find it hard to strip you. Furthermore, a moderate or high amount of DEX can help you cast Gloria Domini and Sacrifice faster; consider having Magic Strings at your disposal. You can Sacrifice wizards while on the defense, just make sure to have enough DEX or, Sacrifice will be very difficult to pull off while on the offense in the midst of a precast. Martyr's Reckoning is able to be performed while sacrificing the wizards: This is to maximize the damage by combining the fire power of Martyr's Reckoning with wizard's spells. Be careful with STR, too low STR will make you have problems with weight, so it would be wise to obtain armor with moderate weight.

This build is very hard and can only be used with the right equips. But its the best build to throw anyone off guard. You need to focus on either Grand Cross or Rapid Smiting. When building make sure your equipment is either INT for Grand Cross or STR for Rapid Smiting. You will need to carry around 3-4 armours, 2-3 accessories and 1-2 weapons. With the STR you'll be able to handle the weight with peco peco but use the lightest most effective armours and only one main. The armours you'll want are pest, marc and angleing then add in anymore you want from there. The purpose of this build to throw out a surprise at any time. When people phsically attack you throw on the pest armour. After they get stoned cursed Grand Cross them to death. When wizards are casting storm gust put on marc and Rapid Smiting them. If you can get a ghostring you'll be laughing when archers attack you just walk up and Grand Cross or Rapid Smiting from afar. The most important thing of this build is its fast cast time and power. To achieve the best cast get a clock tower manager card or 2. Then get zerom gloves. for you shoes use Matyr/Sohee/Verit. And if you are seeking INT, get a Haedonggum with either two Andre cards or two Zipper Bear cards (the SP reduction will mean very little). But you'll have to play around with this build and it will take time to prefect it. Depending on what you come across you can possibly defend against anything. ALWAYS have blue potions. SP will run dry fast at least carry 20 blue potions at all times. You will be the ulimate emperium guard. You can stand on the emperium and grand cross and be able to target afar. So far this is a build in process but the results have proven effective.

This is a very expensive build, as you sacrifice Heal for Battle Chant and thus must rely on pots when mobbing ahead in a party. Be warned: this build limits you to pretty much nothing but parties. It has the potential to be an incredible tank, and a force in WoE. The trade off is the huge benefit of Battle Chant for your party in WoE. This build is incredibly effective in WoE, armed with a fast Sacrifice, a Fast Gloria Domini that can sap SP quickly, and Battle Chant to buff/de-buff your party/opponents. Gloria Domini is extremely effective against a Champion that is aiming for you, and can be a pain for other classes SP reliant. The high Dex makes it harder for Stalkers to strip, and even if they do succeed, you can just Battle Chant to rid yourself of it. The high Vit/HP makes Guillotine Fist not as lethal in some cases, as well as making you Stun proof and pots more effective. Int and Str can be changed to your preferences: Higher Weight Limit, or higher SP max. This build is a more of a WoE support build, but can do excellently as a tank in places like Nameless or Thors. It is however, extremely reliant on pots.

During WoE, a Paladin's role depends heavily on the user's build. Objectively, most players expect Paladins to protect their teammates. A fast cast sacrifice is vital to the survival of your teammates. High VIT allows you to move around and keep up your HP without worrying about stun & recovers more HP with healing items.

Battle Chant is very useful in buffing your party, and inflicting status effects on an enemy. Here are some special uses for Battle Chant

In short, Battle Chant can be used both offensively to buff your allies before breaking a pre-cast. It can also be used defensively to increase the damage done by your allies, or to slow down invading armies by inflicting them with status effects. Another application of Battle Chant is that its negative buffs and damage can affect even cloaked characters and stalkers under stealth.

Another special effect of Battle Chant is that when activated, it removes all status effects both good(Priest buffs, ASPD potions) and bad(negative status effects including strip).

Gloria Domini is a skill that cannot be missed. Depending on the Gloria Domini skill level, opponents will lose 20~40% of their current sp. The skill is best used with high DEX and within Magic Strings. Some uses of the skill:

Martyr's Reckoning is a situational skill. While it achieves high damage-per-second with high VIT and high AGI, it drastically reduces your HP to half depending on the ASPD. Some uses of the skill are as follows:

Builds that are focused with solely Martyr's Reckoning will find that it is harder for Assassin Crosses to kill you and other melee classes to hit you.