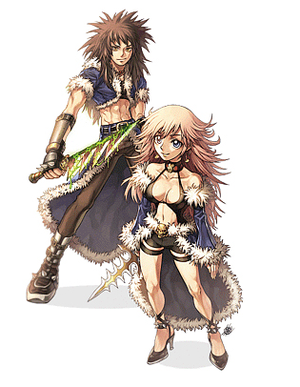 If you're being pursued by a Stalker, you'd best give up all hope of escape. They specialize in spying, sabotage and stalking, stalking, stalking! They are completely undetectable unless they want their prey to know they were after them—a form of mental torture they relish. The thrill of the chase is personified in the elusive Stalker. And if you get the ridiculous idea of capturing a Stalker, save yourself the trouble and simply accept defeat.

They were originally trained to spy upon the Assassins for the Rogue guild but refusing, they now roam alone through the lands.

A Stalker is the Transcendent variant of Rogues. Most melee classes try to avoid them like the plague in fear of getting fully divested and then clobbered by one of their many copied skills during WoE. Stalkers are geared more towards PvP and WoE, however most builds can do PvM just as well.

Their main forte is the now improved intimidating capability. They can opt to keep any skill gained via Intimidate by simply casting Preserve. Most prefer to intimidate Bowling Bash, it works well with most of their builds. One of their other favored skills is Storm Gust being cast at its lowest level, which -usually executed after Divest Armor or Full Divestment- will render most targets immobile in PvP environment.

Their stealth capability also has been improved thanks to the skill Stealth, complementing Stalk well. Although being prone to AoE skills, it makes the caster impervious to detection skills like Sight while also being able to move relatively faster than during stalk. This makes Stalkers one of the two most preferred classes (the other being the Assassin Cross) for guild leaders, by utilizing Urgent Call behind enemy lines after successfully avoiding detection. Slap on a Guard of the Deaf that will render them immune to magic, and they are nearly unstoppable in their tracks.

To become a Stalker, you must find a book called 'the Book of Ymir' in 'Sage Castle', Juno. The book will lead you to Valhalla so you can change your job through the Stalker job NPC. Also you must reach at least job level 40 as a transcendent 1st class character.

Among the classes in Ragnarok Online, the Stalker is one of the most, if not the most versatile class in the game. They can be basically any type of class in the game, melee, ranged or even caster type. Because of this there are really no specific builds for the class. However, depending on what you want to do with your stalker, there are a few guidelines.

There are a few varying builds for the dagger stalker. One chooses to distribute their stats mainly in only three categories, strength, vitality, and dexterity. The other will spread their stats out into one more category, agility. While classes with high vitality fare better in WoE for the most part, as a thief class agility is a very important stat. Basically, even if you chose to distribute your stats into 3 main categories, strength, vitality, and dexterity, you would still want a fair amount of agility, with a thief’s flee bonus you can get 200+ flee easily with just a little bit of agility. Agility also is an important factor in attack speed based skills such as Bowling Bash, a skill most stalkers use often. However, this doesn’t necessarily mean that you need to add 100+ agility, a small amount around 50 is fine for most builds.

Bow builds can have more even variations than Strength based builds, they can be melee based, ranged or even caster. In addition, with their high levels of dexterity they can utilize strip skills to their full potential. Only needing to distribute stat points into two main categories, dexterity and vitality, bow builds can have more points left over for other stats such as intelligence, enabling them to use their many sp heavy skills much easier. However, their main deficiency is that they cannot wear bucklers while dealing damage, leading them to add large amounts of vitality to compensate. However, some variations of bow builds will add larger amounts of agility than vitality, favoring the high flee they are able to achieve quite easily.

Below are some example builds, to help decided what you may want.

This build does well in PvM, and is not entirely negligible in PvP or WoE especially with the introduction of the Soul Linker class and its Rogue Spirit for it made the additional +16 STR (at Lv.5) buff of Stealth to last for 300 seconds. The flee gained from the moderate to high AGI helps solo leveling considerably, and also gives an edge at spamming ASPD based skills in PvP environment. Their lower DEX makes Full Divest less effective, albeit far from useless. They can also opt to fill the same roles as a Gank Rogue does. Their preferred intimidated skills are Bowling Bash, Heal and Raging Trifecta Blow.

The VIT based melee is a tad harder to solo level than the AGI build. But since their stat points are spread only into three stats (instead of four), they can opt to get more STR, DEX and VIT respectively. Their moderate VIT makes them more durable and resilient to status effects, and their higher DEX boosts the usefulness of their divest skills. They can also reach 140 STR with Stealth bonus. Leveling is done with Bowling Bash mainly.

This is the solid divest build. They can choose between WoE or PvP by balancing their stats between AGI and VIT. Either way, their DEX will give them a definite edge at divesting in any PvP environment. They can also choose between melee or range by getting either Double Strafe or Intimidate. Using intimidated skills with a bow also has the added benefit of element on demand thanks to elemental arrows. This Build mainly prefered as a Guild Leader.

Their preferred skill to intimidate is Bowling Bash. They can also go with intimidated Double Strafe if the need arises.

This build is fairly popular. High DEX for divest and fast cast time, moderate to high INT for large sp-pool and damage with spells. Although the build doesn't leave much room for VIT, they can balance it with INT/DEX for less spell damage or cast time in favor of resistance/durability.

Their preferred skill is during their lower levels is Bowling Bash for leveling like most other builds. But during their higher levels, they can make use of Storm Gust. It makes them a viable choice for partying anywhere a regular Wizard would do well with a Priest. They can also be a substitute for Wizards in Biolabs Level 3 during their later levels. Storm Gust coupled with Close Confine and Full Divestment also makes them a good stopping power during WoE (bar Full Chemical Protection) This build is dangerous with the skill Grand Cross. The DEX of this build reduces the cast time of Grand Cross and at the same time increasing it's damage when wielding a Bow type weapon. Much stronger than the usual Grand Cross of Crusader and Paladin.

This is the typical DD Stalker build for WoE, usually used in combination with North Wind or Jupitel Thunder. This build is only effective while under the effect of Rogue Spirit, making the Stalker immune to dispel. North Wind, when used correctly, damages a large number of enemies due to its 14x3 AoE. Jupitel Thunder will kill most targets with their high ASPD and MATK. The downside is this characters high susceptibility to Kaite, as a single North Wind reflected by a decent number of people will kill the caster instantly. Effective counters for this are casting North Wind level 1 three times, then swapping back to max level. It is important to note that the range of North Wind depends on the cast level. Equipment that allows the use of Fireball, if available, is also effective.

Equipment for this build is based around Stun Immunity and achieving 150 DEX for instant cast. After that, maximizing INT for MATK will push the damage of your skills up further.

with either +3 DEX or +3 INT. Carded with a Marc Card or Evil Druid Card, but note that Mind Breaker cannot be cast on Undead targets.

with a Thara Frog Card for damage reduction.

with a Noxious Card or Raydric Card for damage reduction.

with a Zombie Slaughter Card for magic damage.

for DEX and MATK.

for INT, but only if it will give you a max MATK bonus.

Preferably use these items before casting Full Divestment to increase your success rate.