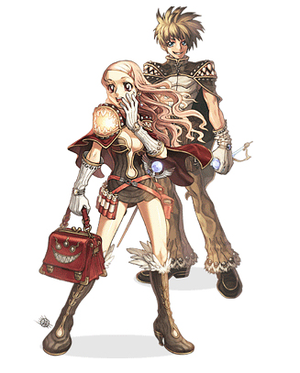 With knowledge comes understanding, and with understanding comes mastery. The Biochemist's unyielding dedication to research and experimentation have raised them to the summit of scientific knowledge. Now that their proficiency with potions and chemicals is unmatched, they are on the verge of manipulating the very laws of nature!

Biochemists are a much stronger class than the Alchemists, provided there are sufficient funds and SP for the new skill Acid Bomb (often abbreviated to "AB" or "AD" as it is known as Acid Demonstration on some other official servers.). While Alchemists were more of a melee class, Biochemists tend to level with skills other than Cart Revolution and Mammonite. Many invest a great amount of their stat ponts into INT and level with Acid Bomb or magic attacks from weapons (i.e. Fire Bolt through the weapon Fireblend) and Homunculi instead.

Biochemists are a popular class in iRO because of the amount of damage they can deal, along with the current lack of methods to counter their offensive skills, when they are used properly.

To become a Biochemist, you must find a book called 'the Book of Ymir' in 'Sage Castle', Juno. The book will lead you to Valhalla so you can change your job through the Biochemist job NPC. Also you must reach at least job level 40 as a transcendent 1st class character.

The defacto build for a WoE Biochemist, this build makes use of the easy access to Stun Immunity through gear. The 1 VIT makes it virtually immune to Acid Bomb from other Biochemists, making it a strong character on a guilds front line. Their weakness is Magic and Dispel, but any Biochemist should be constantly under the effect of Devotion.

A central and necessary support character, these Biochemists have one job: spam Aid Condensed Potion. At level 10, this skill will heal everyone in a 7x7 area for a large amount of HP (based off of their VIT, skills and buffs). Many guilds rely on two or three of these characters to keep them alive.

Acid Bomb, while expensive, can yield extremely high EXP in dungeons such as Thors Volcano and Biolabs 3. Having a priest Lex Aeterna monsters will help reduce the cost of leveling this way. Sword Guardians in Thors 3 can be killed easily with Acid Bomb and a high level priest as early as you get Acid Bomb 10, as you should have maxed your INT already.

The cost of Acid Bomb is overcome by the zeny gained from MVPing while solo or in small parties. A Biochemist will usually beat the competition on almost any MVP. With enough VIT, it's possible to solo MVPs that most people have trouble tanking.

Acid Bomb will one-shot a considerable amount of players in PvP, aside from GR wearers, near everyone will die in two Acid Bombs.

A Biochemist is an exceptional front line class, as Acid Bomb tickles them. Biochemists using Aid Condensed Potion need to position themselves properly to heal as many people as possible while staying out of Acid Bomb range, as they are VIT heavy.

A Biochemist built for Acid Bomb should aim for equipment that adds INT or, sometimes, that gives a significant amount of DEX. However, these equipments are a general guide. Note that these gears are not intended for Aid Condensed Potion Biochemists.

Below are listed the skills that are unique to the Biochemist class. For more information about Alchemist skills, click here.