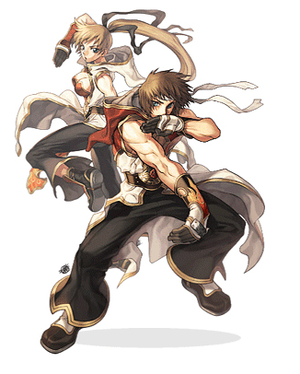 Though the force of his punches are feared far and wide, the Monk realizes that he has neglected something very important—his spirit remains unsatisfied. Thus his body and spirit are not yet in harmony. Through rigorous training and intense dedication, the Monk will finally tap into the strength of his entire being and become a Champion!

A Champion is the Transcendent variant of Monk. Known for the one-hit skill, Guillotine Fist. Champions are even deadlier in close range combat due to their boosted SP count and STR. Champions get mostly new combo-skills as their transcendental skills. Combo skills are mostly used for PvM but still can wreck havoc in PvP if executed properly.

The most loved boost is probably the new skill Zen and the increase in HP and SP since Guillotine Fist relies on the STR and SP count of the caster. With 69 skill points to allocate, Champions can now have the most commonly used (PvP wise) skills maxed. Although the new skills are disappointing for those who are PvP oriented, the 69 skill points to allocate makes up for it and makes them able to get all offensive spirit skills maxed and get Snap at the same time.

To become a Champion, you must find a book called 'the Book of Ymir' in 'Sage Castle', Juno. The book will lead you to Valhalla so you can change your job through the Champion job NPC. Also you must reach at least job level 40 as a transcendent 1st class character.

Champions are a STR/VIT/DEX class thanks to gear that greatly outweighs the need for high INT. 80 VIT is common for Champions that really want to focus on maximizing DEX, but 90+ VIT is more viable due to all the sources of stun in WoE and PvP. Once episode 12 is released on iRO Classic, INT will be a thing of the past thanks to Diabolus Robe and Diabolus Ring granting extremely high SP. Any Champion still interested in INT is likely going to be using Orlean's Glove for DEX.

A tanky Monk and Champion build suited for WoE where Dazzler and Meteor Storm are issues. The main difference between a WoE and a pure PvP build is more VIT in order to account for Stun. 100 STR is the lowest a Champion should have, with reasonable means to hit 110. This can be achieved with 2x Mantis Carded Ring[1]s, an Alice Doll, and the Brave Battlefield Morning Star. The STR gear will allow you to easily kill Swordsman classes, especially under the effect of Gypsy's Kiss.

The VIT allows for easy Snapping through precasts during WoE. Utilizing the Berserk will allow a Champion to further increase their ASPD, enabling even faster Snapping.

A PvP-oriented Champ does not need different stats; rather, changing their gears to focus on DEX is all that is necessary.

with an Incubus Card for increased damage.

with either an Incubus Card for damage or a Nightmare Card for Sleep immunity.

with a DEX enchantment, carded with either a Marc Card or Evil Druid Card, depending on if the user is wearing the entire Battlegrounds set or not.

to increase the damage of Guillotine Fist.

carded with a Verit Card or a Sohee Card. If the shoes are +9, a Firelock Soldier Card works well. If using this, an Evil Druid Carded Medic's Robe is advised against, as the Ghost Property Proc from the Battlegrounds set will override your Freeze immunity.

are the preferred foot gear due to the 20% increase to HP and SP.

carded with a Mantis Card for STR.

for Sight. While Champion's do learn Ruwach, Sight's superior range and lack of a proc animation make it a far better choice. Ruwach just causes position lag and makes it difficult to use Guillotine Fist due to the short range.

for DEX. For use in a corresponding DEX increasing Accessory.

Made to exploit the SP and STR of a Champion, this build's primary objective is damage only. Usually combined with Lex Aeterna, MVPs with HP lower than 300-400k will kneel.

A Phen Card compounded clip or Morpheus's Equip Set is a must for MVPing with this build.

Choosing INT over DEX will ramp up the damage, but may not necessarily be better. A Champ with 120 DEX dealing 200k per fist will outkill a Champ doing 300k per fist with 1 DEX, because they can cast so much faster. It will also allow them to easily get first hit for loot priority.

Mostly made for solo leveling fun, this build's aim is not the Guillotine Fist damage, but the ASPD and massive combo skill damages.

AGI and STR is prioritized for higher damage per second, INT is for SP regen and count while DEX is for Hit or even Guillotine Fist cast time if one plans to have it.

Regardless of its PvM approach, this stat combination could also compete with the other builds and thus Full Combo-Asura builds are born which fuses the most damaging combo skills and Guillotine Fist.

Full Combo-Asura builds are flashy due to their ability to chain almost all combos to Guillotine Fist.

See below for the combo possibilities.

For the most part, Champions utilize the same gear as their non-trans counterpart Monk. A few notable (and expensive) exceptions to this are: