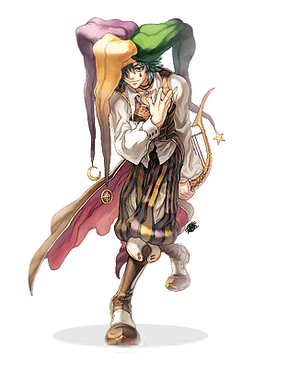 No matter how desperate a situation may seem, the songs of the Minstrel will inspire you to achieve a miraculous victory. Despite the name, the Minstrel is a serious factor in any battle—not just because of his ability to keep spirits high but because of his astounding archery skills as well.

Taught new songs by the gods themselves, Minstrels are now a powerful class. They are able to enchant the enemy with different music and deal large amounts of damage with Arrow Vulcan skill. Minstrel can also give half their stats to a supported character enabling the supported fighter to increase their damage. This job is known as Clown in other localizations

To become a Minstrel, you must find a book called 'the Book of Ymir' in 'Sage Castle', Juno. The book will lead you to Valhalla so you can change your job through the Minstrel job NPC. Also you must reach at least job level 40 as a transcendent 1st class character.

This is a very interesting Minstrel build, however this build is highly discouraged if you intend to do WoE/PvP often. Although discouraged it can be put to good use with, high DEX to achieve fast casting time, additional bonuses for songs and high damage output, high AGI for flee and ASPD (concentration potions are a must), and a fairly stable amount of VIT and INT. The reason for placing points into INT is because of the skill usage. Expect to constantly be using skills to attack opponents. Consider using Arrow Vulcan as the last resort or finishing move. Melody Strike should be used at first to weaken opponents.

With this amount of int Tarot card/Unbarring Octave can be used without burning away SP too quickly.

The WoE build is generally for those Minstrels who want to be the best for WoE and PVP support. Because of the roles they provide, their main stats are VIT and DEX. Most of these type of Minstrels get 95+ base VIT. With 95 VIT you have 100 total VIT (100% stun/silence resistance), with your job bonus of +2 VIT and +3 VIT from a Triple Vital Solid Violin (the cheapest and most effective WoE weapon). 100 VIT has many benefits for a character in WoE. High HP for a Minstrel means songs will be canceled less. Also, pot efficiency is greatly increased. The most important part, though, is how with complete stun resistance and more than 10k HP, the ever important Classical Pluck and Magic Strings skills will not often be canceled. As for gear, with 99 base DEX, you can achieve 150 dex by wearing binoculars and any pair of tights, usually unfrozen for WoE and PVP purposes. 150 DEX allows you to have a very good Magic Strings song, and also instant cast Arrow Vulcan and Tarot Card of Fate. In leveling, this build primarily takes advantage of Arrow Vulcan, though with low INT this may be difficult without a buff slave or priest partner. DS dancing is a more SP friendly option, but may become tedious and difficult due to the low amount of agility.

The leveling support build is not much different than the WoE build for Minstrels. The only change in the build is the stat allocation. These types of Minstrels usually choose to lower their VIT by 20-40 points, in order to add many points into INT. INT helps tremendously in solo leveling, but also greatly increases the quality of the Magic Strings song. These Minstrels often have a very large SP pool, so leveling with Arrow Vulcan becomes quite easy. Of course, with 60-80 VIT a character is still extremely useful in a WoE scenario. Though it may not have 100% status resistance, or as much pot efficiency/maximum HP as a character with 100 VIT, it is still a very strong addition to a good WoE team.

There is also an offshoot of this build that reduces Vit even further and increases Int to 100+ for great SP staying power and maximum skill spamming with Magic Strings. Physically it's lacking in defense and stun resistance, but in terms of party leveling with classes that love to spam skills quickly (SinX, High Wizard, etc.) this build's Magic Strings cannot be beat.

As with the Bard class, Minstrels can use dagger, bow, and instrument type weapons. There is a good chance most minstrels will use each of these weapon types at some point or another in their career. However, what weapons used will generally vary based upon build type, party preferences, and leveling locations.

Daggers are not generally used by Minstrels due to a common lack of STR. It is possible to make a STR build, but it would be extremely unconventional and would lack many aspects that make a Minstrel what it is. However, the most commonly used dagger is the Moonlight Dagger for its SP stealing capabilities (best used when no Scholar or SP items are available). Other choices include a Weaponbreaker and Mailbreaker which when combined with a Blast Clip and Magic Strings (when soul linked a Minstrel can cast Magic Strings upon himself) it can be a very effective tool for breaking gear and disturbing precasts.

Bows are effective weapons for a Minstrel, particularly right after becoming a Minstrel and before learning Arrow Vulcan. Minstrels built with AGI are more effective with bows, though DS dancing can be utilized to override the cast delay of Double Strafe. In general bows are a more effective means of solo leveling as there are better skills for partying purposes. Be aware that specified bow skills such as Double Strafe and Arrow Repel require a bow to be equipped in order to be used. The most common bow used by any archer class would be a Composite Bow [4] carded to suit the situation.

Instruments, for all intents and purposes, are a Minstrel's best friend. He will use them in just about any situation, beit defense, offense, or just plain goofing off. The addition of Music Lessons will also increase damage dealt by instruments. In terms of offense, the use of Arrow Vulcan in conjunction with Lex Aeterna can deal some very nice damage numbers. Be aware that specified instrument skills such as Melody Strike and Arrow Vulcan as well as song performances such as Magic Strings and Classical Pluck require an instrument to be equipped in order to be used. The most common instrument used is a Violin [4] carded to suit the situation. Incidentally, these are easily hunted, readily available, and very cheap, making the acquisition of said weapons quite easy. Carding them, on the other hand, is another matter entirely.