From iRO Wiki Classic
Jump to: navigation, search
This page has been marked as being in need of links (Item/Monster/Map) to a Database. 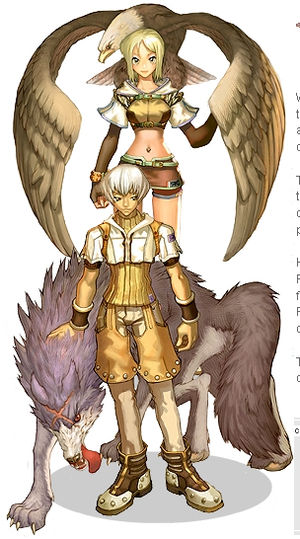 Hunters are skillful at indirect combat. Their increased ASPD with bows helps makes them superior to Archers in ranged combat. They are also able to lay mines and traps on the ground to hinder or catch mobs. These traps will cause various status effects (Sandman inflicts the status sleep, for example) or cause elemental damage (i.e. Blast Mine, Land Mine) to a target.

Additionally, they have a powerful subcharacter, the Falcon. Falcons are highly effective at dealing consistent damage, as their damage ignores DEF. Falcons give Hunters the ability to deal damage to multiple monster at once, by gathering enemies together and employing the Falcon with the skill Blitz Beat. If Blitz Beat is not cast manually, however, the damage of Blitz Beat done to each target is divided by the number of targets it hits at that instance, thus making "auto-Blitz" an inefficient method of mobbing. Falcons also have the ability to reveal concealed enemies and destroy enemy traps.

Hunters were once considered overpowered in Ragnarok Online pre-Amatsu patch, while players were still getting the hang of 2-2 classes, since they were capable of MVPing and seemingly only needed two stats: AGI and DEX to be successful at MVP, PvP, and PvM aspects of the game. However, Hunters have their own weaknesses, namely the lack of VIT and STR, except in certain specialized builds.

Changing into a Hunter from an Archer requires the player to complete a number of tasks:

After completing these tests, the player will be transformed into a Hunter.

These Hunters are powerful damage dealers, capable of dealing some of the highest amounts of Damage per Second in the game under the right conditions. They have little to no defense, however, so they're best used when in a party, shooting from behind. Great for MvPing bosses without high DEF. Some modifications of this build will take into account some INT and LUK for Falcon strikes. Recommended for those who do not wish to lay traps, or for those seeking a jack-of-all-trades build.

Relying on the use of the Falcon to attack, these types of hunters can conserve SP while dealing good damage with the Falcon. One of their other advantages is that Falcons ignore DEF, making them effective anti-tankers. They are slightly more difficult to level in the Archer stage due to their reduced DEX. Recommended for those who enjoy seeing their Falcon fly.

Built for the singular purpose of laying traps, this hunter is made to survive. If the Hunter does not have Enlarge Weight Limit (purchased from the Kafra Shop), they should invest in STR for carrying potions and traps. This build is the most difficult to level of all, namely because of the lack of AGI and DEX. These builds can be effective at mobbing using traps that deal more damage per enemies.

Hunters can use boots. This is the highest DEF footgear and also does not weigh much, so it is usually a good idea to use slotted Boots for this part of your gear.

Generally, Hunters will use a Muffler or if you have the funds, a Heavenly Maiden Robe for their Garment.

Hunters are limited to wearing guards. You cannot attack with a bow while your guard is equipped, because bows are two handed weapons. You can, however, do any Trap or Falcon skill (such as Blitz Beat or Detect) while wearing your guard. Basically only useful for Trapper/Falconer builds.

Nimble Brooches and Gloves are the best accessories to use as a hunter. Usually, with 99 DEX, you can use two nimble brooches to reach 150 DEX on a Hunter. If you prefer to use 140 DEX while leveling, flash rosaries are a very good choice. Of course, if you can afford it (and it works in your build), Bow Thimble [1] may be a good choice.

Arrows are VERY important to Hunters. The fact that a Hunter can use a carded weapon with an elemental arrow without having to trouble a Sage for an Endow is a huge advantage in every aspect of the game, especially leveling.

Hunter Spirit enables use of