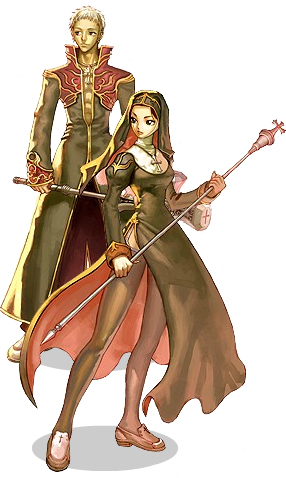 Changing into a Priest from an Acolyte requires the player to complete a number of tasks:

After completing these tests, the player will be transformed into a Priest. This mostly takes place inside of the Prontera Church.

The differences between Priest builds are generally who and where they will support; Battle builds support themselves, WoE builds support in WoE, and Full Support supports in PvM situations.

This is a build with lots of SP, a high Heal and high vitality. Used with maxed Kyrie Eleison and Angelus, this build is fairly effective at tanking hits in PvM situations. Some argue that a staunch 99 INT/DEX build is not as practical for a priest as it is for a High Priest without the Assumptio skill. Some Full Support priests opt for a compromised build with less VIT and more DEX for better cast time and serviceability in WoE. Some prefer getting AGI to dodge; this was once extremely popular pre-Comodo with 99 INT/99 AGI builds.

Basically the same as a Full Support build, it’s mainly the skills that differentiate a WoE build from a FS build. VIT is slightly more compromised for DEX and there is even some STR thrown in there for better carrying capacity. The important skills for WoE support include all your typical support skills with more emphasis on Safety Wall and Sanctuary. A must-have WoE skill is B.S Sacramenti, nevertheless some WoE priests forgo this skill in favor of higher level support skills.

The TU build is often treated as a hybrid build. Most TU priests double as Support due to the compatibility of stats and availability of support skill points. INT and LUK are the two stats that directly affect the success rate of insta-killing a target with TU, and a must-have skill is Gloria. There is debate about the practicality of having any LUK at all (success rate difference of 2-3%), especially if the priest is hybrid, in which case those extra points can be invested into either VIT or DEX.

The main concern of ME priests is their MATK (INT dependent) and cast time (DEX dependent). This is a solid soloing build often used with level 10 Safety Wall and Lex Aeterna to mass kill Undead and Demon monsters through the use of Magnus Exorcismus. ME priests can also effectively instant kill Undead by using their level 1 Resurrection, which is ranged and has no cast delay. Due to their large repertoire of prerequisite skills, ME priests are reasonably efficient in PvP and WoE situations. With fast cast times, a ME priest makes for an effective Sanctuary and Safety Wall slave, and can shoot off a fast stream of high MATK Holy Light in self defense.

It is often useful for a priest to buff themselves before buffing their party. In doing so, the priest's buff is the first to wear off, and will instantly alert them that their party members' buffs will also wear off soon. This is especially useful for new priests who may forget to buff party members. There are exceptions, however, such as when one is low on SP.

In PVP, it may be useful to use level 1 Kyrie Eleison to cancel the effects of Assumptio on your opponents, as Assumptio cannot coexist with Kyrie Eleison.

Priests should remember that Lex Aeterna loses its rather long after-cast delay if used under the effect of Magic Strings, to the point when it can be constantly casted. This is a great way to double the damage output of parties.

Refer to Acolyte page for most equipment recommendations, the ones listed here are the few with higher level restrictions.

The levels at which a Priest receives a certain bonus.