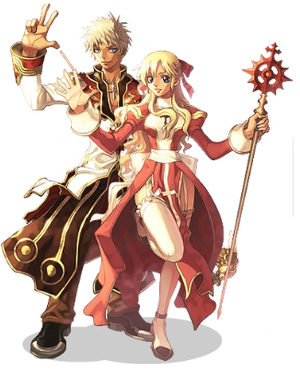 High Priest is the Transcendent variant of Priest. The High Priest is the epitome of spiritual calm. A bulwark in the storm of chaos, he is more than capable of protecting his comrades when faced with even the most ferocious enemy. Despite the many skills taught to them by the Priests of Prontera Church, they still need to learn a few more from the Gods themselves. Now able to create areas where no violence may occur, they are able to Heal more, Bless more and Serve even more. Their skills are truly gifts from God. High Priests get further improved tanking ability thanks to Assumptio. The additional statpoints from being a Transcendent, coupled with Meditatio, makes them able to spread their stats out further, which in turn makes new builds like the DEX/VIT/INT WoE possible.

To become a High Priest, you must find a book called 'the Book of Ymir' in 'Sage Castle', Juno. The book will lead you to Valhalla so you can change your job through the High Priest job NPC. Also you must reach at least job level 40 as a transcendent 1st class character.

This build is for the WoE-oriented High Priest. It isn't a bad PvM build, either, but requires a better player due to reduced max Heal output and reduced SP regeneration.

100 VIT is an absolute must. This can be acquired using just base VIT and job bonuses, or +10 VIT Food. High Priests don't die very often, so typically only 4 to 6 Foods will be used per WoE.

100 DEX or more is nice because of the cast time on Increase AGI and Assumptio, for buffing. A huge amount of DEX isn't necessary.

The INT is where most people vary. Having no INT is bad because healing the Barricades in WoE 2.0 is necessary when under attack. Sanctuary will not cut it. 100 INT provides status immunity to Sleep, which will help you support. If 100 INT cannot be attained, use a Nightmare Card to provide equipment based Sleep immunity. This can be carded in either a slotted Middle Headgear such as Sunglasses [1], or in a Ulle's Cap [1].

The AGI will allow a High Priest to spam Blessing and Status Recovery much more quickly. Standing in Assassin Cross of Sunset with a Concentration Potion or under the effects of Aid Berserk Potion will greatly increase buffing speed.

with a Nightmare Card for Sleep immunity.

with a DEX enchantment, carded with either a Marc Card or Evil Druid Card, depending on if the user is wearing the entire Battlegrounds set or not.

carded with a Green Ferus Card.

are preferred for the 20% HP boost along with the freedom to use an Evil Druid Card for Stone Curse Immunity.

The INT/DEX ME High Priest build is the staple Magnus Exorcismus build with a kick. They can solo well in certain places with a lot of Demon or Undead thanks to Assumptio boosting their fragile build. Also thanks to the added statpoints, they can optionally get by with less INT or DEX for some added VIT.

Unless you pick up a lot of VIT, steer clear from WoE, as this build will be stunlocked.

The INT/VIT support High Priest is a staple build for non-WoE players. The high SP pool means SP is rarely if ever an issue, their Heal amount will easily top 3000, and with 100 VIT without foods, they will sit with a sturdy 12-14k HP.

DEX is the major varying factor in this build. No DEX will mean your Assumptio cast time is dismal, and buffing becomes more of an ordeal that holds up the party. Additionally, the ability to throw up a level 1 Assumptio in under 1 second if it drops is a life saver.

Sanctuary 7 is a nice skill to have in order to speed up the buffing process. By placing one down you can begin casting Blessing, Increase AGI, Assumptio and any other skills that need to be up.

This build tries to combine the best of both worlds: they get fairly high VIT like a support build, but also decent DEX. While they'll have slower cast times than a ME High Priest, they will be more durable and status resistant because of their added VIT. The build heavily relies on the added benefits of Meditatio due to their lack of INT, although they still have much better SP Regen and Heal-Power than regular Priests.

They tend to get skills that can be useful during WoE, like Safety Wall and Sanctuary. They also generally have lower levels of Gloria (Lv. 1-2) and Magnificat (Lv. 3).

This build is the staple of the old battle priests before the 2nd jobs. This build is very rare in WoE/PvP scenarios since they don't have skills to amplify attack, but are flexible characters in PvM scenarios due to their ability to both support and fight at the same time. Support-wise, battle builds usually have the same skills as support builds, although the lower SP pool and cast time reduces the efficiency. Signum Crucis is optional. Due to their nature of using Aspersio and Demon Bane, battle builds are commonly oriented towards fighting Demon race monsters. Mace Mastery is an optional bonus.

Status builds may vary greatly depending on the preferred playing style. The only common similarity is high AGI. STR is needed for attack strength, as there are no offensive melee skills. DEX is required for Hit and cast time. Some builds are Crit oriented, leveraging specialized weapons and cards, as well as Gloria. The amount of VIT and INT taken depends on hunting locations and intended playing style.

The levels at which a High Priest receives a certain bonus.