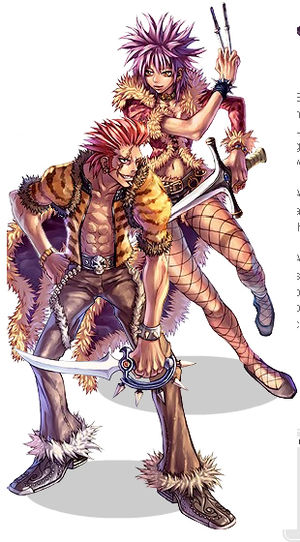 Rogues are a versatile class, only really lacking in PvM skills but excelling in PvP and WoE. With their strip skills, Rogues can render most classes useless in a PvP environment. With Gank, a Rogue can obtain double the loot another class could gather in the same amount of time. Rogues can wield bows, daggers, or swords and can copy a variety of player skills to help them level, although a Rogue cannot use Intimidate to its full potential like its transcendent counterpart can.

Changing into a Rogue from a Thief requires the player to complete a number of tasks:

After completing these tests, the player will be transformed into a Rogue. Most of this takes place inside the Rogue Guild at the Pharos Lighthouse (cmd_fild07).

With max Intimidate, the dagger gank rogue can level quickly with copied skills (Bowling Bash and Raging Trifecta Blow the most common). Sword Mastery boosts damage with both daggers and one-handed swords, and Gank doubles loot gain. The more money-minded can max Mug in exchange for levels in Sword Mastery or Intimidate.

Stats-wise, high STR and high AGI will guarantee swift and powerful attacks. VIT is less important, since AGI will provide enough flee to dodge most attacks. The dagger gank rogue excells in PvM and will level quickly to achieve Stalker, should PvP or WoE be the ultimate goal.

The strip rogue has high VIT for survivability, along with high DEX for successful divests and moderate INT for a good SP pool (since divests drain SP quickly). A small investment in the Double Strafe or Intimidate trees will make PvM leveling easier.

Bow rogues can snipe enemies from afar with Vulture's Eye and Double Strafe, then deal extra damage with a copied skill via Intimidate. If feeling PvP or WoE oriented, they can sacrifice levels in the Double Strafe or Intimidate trees for some strip skills. However, only the first divests will probably be obtained (Divest Helm and Divest Shield), lest the bow rogue wishes to become a strip rogue (in which case the strip rogue build would be more useful).

Weapons: Quadruple Carded Composite Bow (preferably +7 to +10 to make up for the low ATK), Double Carded Gakkung or Double Carded Arbalest. While previously the Sidewinder Card was preferred for bows used by rogues (because it allows the full level 10 Double Attack to be used with bows), the kafra shop Chick Hat item which has the same effect, has largely made this obsolete.