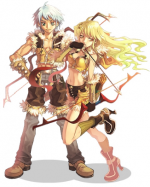 One shot, one kill! There is no better way to describe the Sniper. They specialize in precise and powerful ranged attacks. The Sniper is the master of the Bow. In a Sniper’s hands, the bow is a deadly instrument capable of dealing massive damage and carnage. They gained a new skill called Falcon Assault with the help of his lifelong friend, the falcon. When friendship strengthens, so does their power. They also have skills that amplify their bow mastery, as well as piercing arrow skills.

To become a Sniper, you must find a book called 'the Book of Ymir' in 'Sage Castle', Juno. The book will lead you to Valhalla so you can change your job through the Sniper job NPC. Also you must reach at least job level 40 as a transcendent 1st class character.

The theme of this build is to shoot arrows fast with a high damage output. As a sniper, their damage goes up even higher with Falcon Eyes. This build does not utilize traps except for Ankle Snare and maybe Sandman or Freezing Trap. With the high amount of agility, quick double strafing has never been easier.

The theme of this build relies solely on the usage of Falcon Assault. Usually an ordinary sniper would use a bow but Pure Falconer's can use a dagger[slots]/guard[1] combo. Slap on a Horn/Thara frog card in that guard and it makes a pretty good tank. This build is mostly PvP/WoE based and its rather difficult to level up, but you can guarantee it can kill ALL other types of snipers if used correctly.

Pure Falconers also utilize traps thanks to their high INT, so don't be afraid to drop a few landmines. Some Falconers still prefer the usage of bows because of Arrow Repel or Phantasmic Arrow, but its entirely up to the user.

Fighting tips: When fighting other non-falconer snipers, try using blitz beat on them till you're low on HP, then finish off with Falcon assault. If you are sure you can kill other players with one Falcon assault, don't bother wasting your SP with blitz beat(it is quite SP costly).

This build is very popular for PVP oriented Snipers. As opposed to the powerhouse agi/dex build, this build sacrifices around 10 points from each of those stats and invests them in VIT. Since 150 dex is the minimum recommended DEX allowed for a PVP sniper (instant casting Arrow Repel and Falcon Assault is very important), snipers with this build get the minimum base DEX needed to achieve 150 with buffs. Most of the time this build has 90 base dex, which at job 70 becomes 90+60 with nimble gloves. The advantage of this build is that it is only slightly weaker due to lower dex, but has much higher survivability and status resistance than the classic powerhouse build. Thanks to the additional stat points awarded to Trans Class characters, and the Sniper skill Falcon Eyes, getting 50-60 vit does not horribly gimp the sniper's attack strength or attack speed.

FAS is the sniper skill, Focused Arrow Strike. It deals damage to a massive area, but requires positioning to use effectively. The skill only works when fired at a 90 or 45 degree angle, and that may not always be possible in WoE. Thankfully, you can cast this still on your allies and use them to aim on opposing guilds to keep you away from harm. Improve Concentration, True Sight, +10 DEX, AGI and VIT food, and Abrasive (+30 CRIT) should be used to maximize the potential of this skill, as it can Critical Hit. A Sniper should easily reach 80 CRIT or more in WoE.

for Crit and Crit damage (Must use a Sharp Arrow). Could opt for a Nightmare Card for Sleep immunity.

with a Nightmare Card for Sleep immunity.

for DEX and ATK%, but you will need Sleep immunity from your upper headgear.

with a DEX enchantment, carded with a Evil Druid Card.

carded with a Green Ferus Card.

Sniper gear is pretty much the same as Hunter gear. Any Hunter who has a complete set of gear will be completely ready to become a Sniper. Hunter gear suggestions can be found Here

Of course, due to the slight differences between Hunters and Snipers, there are a few things to take into consideration when gearing a Sniper.

Wearing two nimble gloves, tights and binoculars basically gives you +10 DEX to reach your next bonus. Snipers with 99 DEX points will be able to hit 160 DEX with just nimble gloves and tights (no DEX increasing headgear required) when they hit job 60. At job 69, another DEX bonus is awarded to the Sniper which then opens up a space for a Brooch to be used for accessory, or any type of armor to be used without losing the damage bonus from dropping down to 159 or 149 DEX. Builds that do not have 99 base DEX will have a slightly different setup, and may be a bit different considering the different amounts of DEX needed to hit their bonus. It is also always important to consider the use of DEX adding headgear while using The Sign Accessory for an extra boost in damage. For example, many snipers choose to equip The Sign and an Apple of Archer, rather than using a Nimble accessory and any headgear of their choice.

Always carry a guard with you depending on the monsters you are fighting. If you are leveling with a mobber or priest, and you become a target of the mob somehow, it is always good to keep a racial guard with you to protect you from a quick and painful death. This is especially important to Snipers that level with a mobbing partner who usually gathers mobs for the Sniper to kill with Focused Arrow Strike. Remember, Bows are two handed weapons. This means when you have your guard on, you cannot make an attack with your bow because it is automatically unequipped. However, remember that Trap skills and Falcon skills may be used while your shield is on. It is good to get in the habit of equipping a shield while trapping or using skills such as Detect or Falcon Assault.

These gears allows Snipers to be better than before! Even though they might not come cheaply: