From iRO Wiki Classic
Jump to: navigation, search
This page has been marked as being in need of links to other iRO Wiki pages. 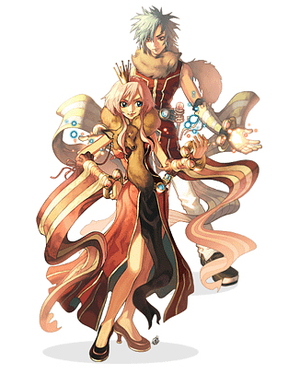 Quenching their lifelong thirst for learning, Scholars have accumulated a greater body of knowledge than ever before! They have new, creative uses for their mystical skills to support allies and frustrate enemies. Although Scholars do not boast the sheer power of their counterpart, the High Wizard, their inventive applications of magic are their keys to victory.

Scholars are the transcendent version of Sages. Through rebirth, Scholars gain class-defining SP manipulative skills such as Soul Exhale, Indulge, and Soul Siphon. The two former skills enable Scholars to act as endless sources of SP, which makes them a favorable class for party play. The third SP-manipulating skill, Soul Siphon, allows Scholars to offensively eliminate all of their opponent's SP, making Scholars a formidable class for PvP and WoE.

Their offensive power also gets a boost in the form of Double Bolt, Foresight and Fiber Lock, making one-hit kills for INT-based builds a possibility.

To become a Scholar, you must find a book called 'the Book of Ymir' in 'Sage Castle', Juno. The book will lead you to Valhalla so you can change your job through the Scholar job NPC. Also you must reach at least job level 40 as a transcendent 1st class character.

This is similar to the Hindsight Sage build. However, a Scholar is able to further enhance the efficiency of Hindsight by using the skill Double Bolt, which vastly improves damage compared to a Sage. Note that this build requires a constant Sage Spirit link from a Soul Linker to function effectively. This build is less vulnerable to silence due to the automatic-casting nature of Hindsight, and can deal high amounts of damage. Some builds will take VIT as well to increase HP, or DEX for casting speed. Largely a PvM build, Hindsight types are rare in WoE and MVP scenarios.

Considered a PvP build, the Bolter utilizes high INT, Foresight, Fiber Lock and Double Bolt to inflict massive damage on their foes. They can also render their opponents semi-useless with Soul Siphon. This build allows Scholars to perform the same supportive roles as support-type Scholars due to their high DEX, high maximum SP, and similarity between skill builds, in addition to having offensive options. However, having minimal VIT leaves this build more vulnerable to stun and silence status effects than support builds in PvP and WoE scenarios. Refer to the Bolter section for information on PvP tactics.

The Support type is the most common build among Scholars. Although they come in a large variety of stats, their common point is the maxed DEX and their very low INT (can be hybridized), which makes solo leveling for them via bolts neigh impossible. They are however much preferred for party play with classes that heavily rely on SP.

This is the staple WoE build for a Scholar, maxing DEX a getting either 100 total VIT, or 99 base VIT. A few points into INT to make Heaven's Drive knock players out of Hiding or similar skills. The rest of the points go into AGI for ASPD.

This build does not differ much, stat-wise, from their Sage counterpart. However Double Bolt greatly enhances their offensive capability, while Foresight offsets their generally low DEX when bolting manually. Coupled with the Sage Spirit buff of Soul Linkers, they can deal high amounts of damage. They can also render their opponents semi-useless with Soul Siphon or support their allies with Soul Exhale. These builds vary largely, some even using pure melee damage for attacking. Hybrids can deal with many situations, but are usually not optimal in a certain field. They are fairly rare in WoE/PVP activities. Unusually, they can use automatic-casting equipment to further supplement Hindsight.

Although INT based or Battle builds can opt to solo, Scholars are much preferred for party play thanks to Indulge and Soul Exhale. It allows them to team up with classes that require lots of SP to do the killing, mostly Snipers, Monks/Champions, and Lord Knights.

In addition to everything Sages can do, Scholars can refill the SP of needy classes and use Fiber Lock to immobilize monsters.

Besides the Sage skills already available to them, they get further use in supporting SP needy classes with Soul Exhale. They can also make use of Soul Siphon and Soul Exhale to strip other classes of their SP, or Fiber Lock, to stop anyone in their tracks.

Since Scholars retain all of the roles of a Sage, their equipment is also similar to Sage equipment.

These weapons are very effective if refined up to +9 ~ +10

The job levels in which a Scholar receives a certain bonus:

Scholars can use Concentration and Awakening Potions.