Stats are the six fundamental character statistics that make (or break) a character. Stats start out with a base value of 1 and can be raised as far as 99. With bonuses, the effective value can pass 100. Base stats are increased by spending stat points, higher stats costing more to raise. Stat points are gained with base level increases, the amount increasing with higher levels.

Strength: This stat directly increases your physical damage (except using Guns, Instruments, Whips, and Bows), allowing you to deal damage even if you don't equip any weapons if you invest a sufficient amount of STR. 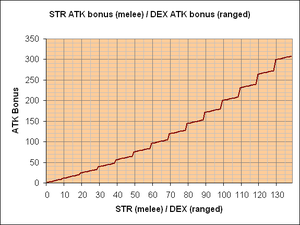 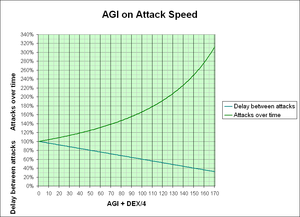 Agility: Used to increase your attack speed and chance of dodging.

The actual ASPD calculation depends on AGI, DEX, ASPD potions and skills, the type of weapon you are using, and your job. It can take between 4 and 10 AGI to increase ASPD by 1. More details can be found in the entry for ASPD discussion. 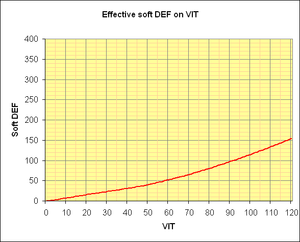 Effect of VIT on soft DEF

Vitality: Each point of VIT provides the following:

The VIT-based DEF is not particularly useful at late levels (due to calculation being Final Damage = (Initial damage - Armor-based DEF (%) - Any cards that provide damage reduction or resistance - Any other reduction effects) - VIT-based DEF (pure value), but it still doesn't negate the fact it grants you much higher HP and great efficiency from healing items. 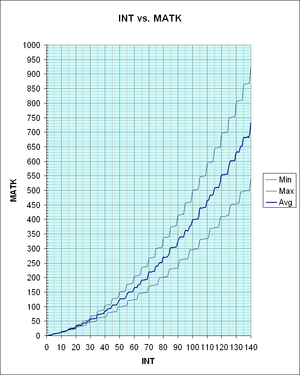 Intelligence: Primary stat for spellcasters, and this is used to increase their MATK and MDEF. Every 1 INT provides the following:

Every 100 SP will provide 1 more SP regenerated during natural regeneration state. You gain 1 INT-based MDEF for every 1 INT you increase. INT-based MDEF is taken into account after all other factors such as cards, your item-based MDEF, and such has been calculated first.

Dexterity: Decides your accuracy with your weapons. It also increases your ASPD (but requires more stats than AGI to increase ASPD by 1), as well as decreasing cast time of your spells. It also reduces the min-max damage rate, allowing you to do better average damage output, eventually almost always only doing top-end damage should you invest in DEX highly. As noted in STR description, bow, gun, whip and instrument users do not increase their damage through STR; they do it through DEX. DEX also has a close relationship with success rates with creation abilities such as weapon forging as a Blacksmith class or making a potion as an Alchemist class. Also, success rate of ability Steal (Thief's ability) depends on your DEX.

Every 1 DEX provides the following:

Luck: Each 1 LUK provides the following:

LUK does not effect ingame drop rates, or chances to get a rarer item when killing. Its simply based on in-game percents not LUK as a stat. 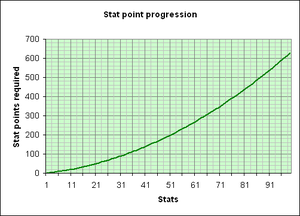 There are also secondary stats which are determined by stats you have (along with gears and abilities).

Attack: Your physical-oriented attack rating for both ranged and melee weapons. It is listed as A + B in the stat window, where A is Weapon DMG + STR / DEX / LUK, and B is the damage gained from weapon refinement upgrades. Barring elemental issues, even if your main damage is negated completely, you'll always do the damage bonus granted by weapon refinement upgrades.

Magic Attack: Your magical-oriented attack rating. Using the number here, you can guess approximate amount of damage you will do with your magical ability. You should be wary of enemy elemental state, as using wrong elemental spell will cause you to do low amount of damage. The Maximum MATK grows by Int+(Int/5)^2. The Minimum MATK grows by Int+(Int/7)^2. But aware you have to round down the number resulting from Int/5 and Int/7 In example 33 Int means Maximum MATK is 33+(6,6)^2 and has to be Round down to 33+6^2 and Minimum MATK 33+4,71^2 rounds down to 33+4^2 resulting in 69 Maximum MATK and 49 Minimum MATK.

See MATK chart for a table of MATK at each level of INT.

Magic Defense: Your defense rating against magical damage. It works the same way as plain DEF in terms of mechanics.

Hit Rate: Your accuracy rating, which is calculated by your DEX + any other bonuses + your base LV value.

Critical Hit Rate: Your critical hit rating, which does damage that fully ignores enemy DEF, both % and pure value part. Because of difficulty of acquiring CRIT without sacrificing lots of other stats or useful cards/gears, it is recommended it is used on classes that naturally has fast ASPD one way or another. Offensive Skills do not take CRIT into account with the exception of Focused Arrow Strike. Critical Hit also ignore FLEE but not PERFECT DODGE.

The critical rate being displayed in the status window isn't the true value which is applied against monsters. The "status crit" is calculated by dividing current LUK by 3 and adding the crit bonuses from equips/cards. The real crit rate is a little different. Formula : LUK*0.3 + bonuses.

When you attack a monster or a player, the target's LUK influences your critical hit rate. Every 5 LUK that the target has, you lose 1% crit (Which isn't shown in the status window). For example if you hit Angeling, that has 100 LUK, you'll lose 100/5 = 20 crit. This crit tolerance is also known as "Crit Shield" on Doddler's monster database.

Critical is doubled when you use Katar type weapon.

Flee Rate: Your dodge rating. It is shown as A + B in the stat window, where A is your AGI + any other bonuses + your base LV value, and B is the chance of doing 'lucky dodge', which can even dodge critical attacks. Make note that no matter how much AGI you have, you cannot have more than 95% dodge rate against anything in the game, however this does not ring true inside WoE Maps, as players can have 100% dodge rate in these maps.

ASPD is Attack Speed. It depends on the player's class, equipped Weapon Type, Speed Modifiers, AGI and DEX. ASPD increases Hits/Second exponentially. It has a limit of 190 ASPD or 5 hits per second.

The following are values which while not directly visible in the game on the Status Window are directly measurable and can have just as big an impact on gameplay.

Base stats mean the stats alone without the bonus part (which is indicated by +X part in your status window). Total stats include both base and any bonus stats you may have.

Be warned any investment in stats cannot be reversed except through stat reset NPC (very rare that this NPC is put in the game, so don't hope for one), or by rebirthing to prepare for transcendence classes.