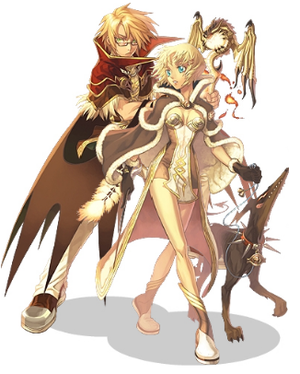 The Mage and the Wizard have been able to tap into mystical and elemental magic but the real power is now fully realized in the spells mastered by the High Wizard. Only a fool would dare challenge the awesome might of a High Wizard's power head on!

A High Wizard has much more power than a regular Wizard, and at a much earlier level as well. Unlike the Wizard, it has Mystical Amplification, which will give 50% more MATK on the next offensive magic skill to be cast. This grants a High Wizard a lot more power early on, and has about equal the strength of a level 99 Wizard in their early 80's, maybe even a little earlier. With that skill, they can level in Magma Dungeon immediately with Priest without worry of having too little MATK.

Ganbantein, and Gravitational Field prove to be very useful in WoE situations, whereas if there's too many of a certain element going on, or the precast breakers seem to be getting in, you can use Gravitational Field to get much more damage than casting any of your other spells, since the damage cannot be negated, and always does the same amount.

Ganbantein also has other uses in WoE. It can cancel many different spells that are cast on the ground. Such spells include Pneuma, Safety Wall, Battle Chant, and Warp Portal. It rips holes in the Sage class' ground spells as well, so it's good for stopping a Sage or Scholar from getting their Magnetic Earth to work as they desired it to.

Napalm Vulcan has a 25% chance of cursing at max level, and has 5 levels. Very good for cursing opponents in precasts, or just to buy time in general to help some killers get to the tanks in time to stop them, since it has splash damage.

Soul Drain allows the player to increase current Max SP by 20%, and every time a target is killed (monster) with a single target spell, player will restore SP equal to a certain percentage of that monster's SP. This basically allows the class to have infinite SP stacked on to the High Wizard's already really fast SP recovery rate.

Stave Crasher is a very promising skill. This skill does a physical attack based on the High Wizard's MATK. The higher the MATK, the more damage. Since it counts as a physical attack, card effects and any other effects that come from doing physical attacks will work with this skill. You can pass on status effects, divest people in the near future, break their equipment, etc. Definitely a nice skill to have.

To become a High Wizard, you must find a book called 'the Book of Ymir' in 'Sage Castle', Juno. The book will lead you to Valhalla so you can change your job through the High Wizard job NPC. Also you must reach at least job level 40 as a transcendent 1st class character.

This Build unleashes the High Wizards max potential by pulling out all the MATK it can. With Mystical Amplification they become deadly MvPers with their Storm Gust. Very powerful during WoE also, this build lacks however in the High Wizards Max HP.

With more VIT than the PvM Build, this build is more WoE oriented. It still has enough MATK with Mystical Amplification to deliver killing blows to opponents in WoE. This build gives you much more survivability than the PvM Build. It also lets you use all stat points without leaving any points unused.

This is the glass cannon build for the current WoE meta. Status Immunity is achieved through equipment. Maximizing INT or DEX via gear depends on if you need to specialize in Storm Gust - which requires INT - or Meteor Storm - which requires DEX. Jupitel Thunder is good for focusing down low VIT characters, such as other High Wizards or Biochemists. A typical skill build will include:

with either +3 DEX or +3 INT, for Storm Gust or Meteor Storm, respectively. Carded with a

or Evil Druid Card, but note that Mind Breaker cannot be cast on Undead targets.

with a Flame Skull Card for Stun Resistance.

with a Salamander Card for Meteor Storm damage or a Noxious Card or Raydric Card for damage reduction.

with a Zombie Slaughter Card for magic damage.

for DEX and MATK.

for INT, but only if it will give you a max MATK bonus.

for damage, INT, DEX and to add Stun to all of your spells.