From iRO Wiki Classic
Jump to: navigation, search
This page has been marked as being in need of links (Item/Monster/Map) to a Database.

Amatsu is quite a beautiful city, done in the style of old Japan. Amatsu has one dungeon and one field map. It can be accessed from Alberta via an NPC on the docks; there is a 10,000 Zeny fee.

The tale unfolded in Alberta… a tale that told of a sailor whose ship ran into a raging storm. The ship drifted off-course and he found himself lying on the banks of an unknown village. The kind natives took him in, fed him, and nursed him back to health. As he explored the place, he felt awed by the exotic beauty of the land, which later came to be known as Amatsu. Straw huts line the streets and exquisite cherry blossoms gave the atmosphere a pinkish-white glow. At the center is a shrine that sits partially underwater, surrounded by lush pine and bamboo trees. At the East stood the magnificent Lakeside Castle, where most of the village treasures - books and historical valuables - are contained. Years later, he returned to his homeland, Alberta. His love for Amatsu was immortalized in his journals and maps. Upon his death, people who admired his sense of adventure submitted his written accounts to King Tristan III. The King, whose curiosity was then piqued by the thought of a new potential trading ally, announced to all adventurers that he would reward those who could bring him valuable information about this new eastern land. The route to Amatsu was dangerous, and yet seafarers braved the wild winds and murderous storms, hoping to bring glory home. Their persistence prevailed and a few years later, Rune-Midgard and Amatsu began trading with each other.

Quests added with the Amatsu update can be found here. 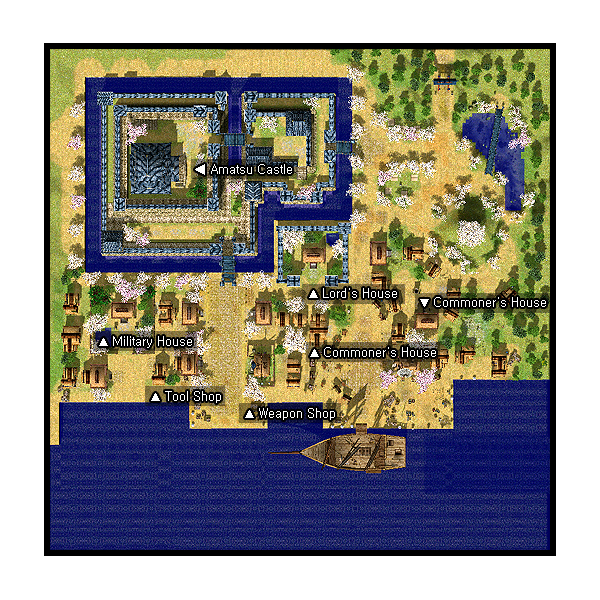 Deep in the heart of the Lakeside Castle lays a shadowy secret. Rumor has it that there is a hidden entrance that leads to a mysterious series of dungeons. The first of these is the Tatami Dungeon, a deceptive labyrinth of endless tatami and rows upon rows of rooms. None of what you see here are real, but many have been misled to believe otherwise and have since been aimlessly walking into dead ends.

The second is the Underground Battle Field, a cavern where many battles have taken place. And the last is the Haunted Shrine, also known as the Underground Shrine. There have been rumors (in hushed tones) on what lies in the Haunted Shrine, but no one has ever discovered what it was. All that is known is that the place has been sealed, and the ominous aura it exudes could ward off even the most courageous of warriors. The last level of the dungeon is where the MVP Boss Incantation Samurai or Samurai Specter resides.

Legendary Tree
The legendary tree doesn't actually speak. Instead, it mirrors the last conversation you had with the NPCs surrounding the hill. There are four different reactions, and another if you haven't spoken to any of them yet.