Hello this is Ragnarok Online Operation Team. We inform you we are going to Close the International Server Provisionally. For now and Further,we can"t take off Our Eyes from the Korean Commercial Service, Also we have to consider Next and Continuous Commercial Plans in Overseas. Therefore it is regarded as Impossible to Manage or Support the International Server any more for now. Please Understand Our Desicion this time. It will be fore the Better and Bright Future of all of us and players. Followings are the Detailed Information of Shutdown.

1.The Presice Shutdown Time is not Arranged yet. It will be next week. We will announce it later when it"s decided.

2.Shutdown Period will take Approximately 3 Monthes for the Maximum.

3.Free BBS,Email Support are totally Closed Together for the Term. (But you can View the Notice or other Regular Sections of Website.)

5.Simplified Chinese,Traditional Chinese,Thailand Servers will be opened in August. Players in these Areas could use these 3 kinds additional services.

6.Every Details followed Renewing Openning Server will be announced Later.

We apologise again and Meanwhile we appreciate all of you showing much affection on `Love and Hatred" Ragnarok. We promise we will be back with Ragnarok,the Better and the More Fabulous Version Next Time. Thank you for the Cooperation.

After the transfer, English server will be increased into 2 servers and also players would enjoy Ragnarokonline with less lag/disconnected troubles.

02/04/2003 8pm
The time of server shutdown just has been postponed due to unavoidable circumstances.
We will inform you the right time of shudown later again.
Sorry for your inconvenience.
There are lots of incident involved with the Fake RO Flash movie on internet. It is a Key
Logger (Trojan horse) program not a real one. Please keep away from it.

03/03/2003 11pm
Here's a cute report from a tester which I would like to tell all of you.
His message is:
My main User ID is **********(secret) and my character *******(secret) is having a problem.
I know this came is still in beta but I would like to know if there is a way to ignore
private message.
I 'm sure it's a mistake but there is this character who keeps a private messaging me
information and I have no clue what they are talking about.
I've tried to talking back to them, but it looks like
they won't respond at all.
I think their user name is GOD-POING or GOD-PING or
something similar to that, but I am not exactly sure.
Can you tell me of a way to ignore this?
Thank you for your assistance, *******(secret).
Hopefully everybody gets to know GOD-POING(not GOD-PING) is the GM
who supports international Ragnarok, and don't get much bothered by
the Official message(not private one).
GOD-POING: I have one thing to inform about the one word I said
GOD-POING: Someone claimed I said "WTF" which stands for
GOD-POING: "what the ...."
GOD-POING: I know what WTF means -.-
GOD-POING: I would like toinform I didn't say it for a purpose
GOD-POING: it was someone's name ?!
GOD-POING: You know, I am a kind of conservative asian females,
GOD-POING: I hate to hear/to use those kinds of foul language.
GOD-POING: I hope all of you won't use those kinds of words for your acc name
GOD-POING: or character names.
GOD-POING: -.- Mofo I accidentally said yesterday was intended Mido
GOD-POING: which is someone's name also. -.- Stupid me always do typo.
GOD-POING: Yeah yeah I know what that word means
GOD-POING: Well sometimes you need to accept my broken english =3=3=3=3
GOD-POING: I am trying to speak more properly though.
GOD-POING: Thank you my dearest users ^_______^.

1/With your recent hiring as GM for the English Ragnarok Online beta, how many people are now working on the English beta exclusively?

Unfortunately untill now there is only me.But It's not like a lack of human resource problem,I heard there is the different plan for each server.Also same as me,in japanese server there is only one gamemaster named `Member X' and he manages 3 servers in Japanese server.

2/Does Gravity intend to hire in game 'Police' or 'Admins' that patrol the servers for hackers and scammers once RO English switches from Free to Pay 2 Play, kind of like Lineage?

It is under consideration.Alo that is just what I have wished for. It would be activated after settle down in Korean server first.(It is on the test now.)

3/What is Gravity's forecasted number of English subscribers when the game is Pay 2 play?

Sorry but we can't give you the definite answer.

4/Are there any plans to move the English beta server to North America?

Definately. And it will be soon.

5/In recent times, the server population exceeded 8000 users at peak hours, while at the same time, none of the Korean or Japanese servers exceed 5000 users. Does Gravity plan to give english users another server?

Yes but it will be after fixing up hacks and a few troubles.

6/Many non-english speaking people have been using the english beta in recent times. Does Gravity mind if people from Germany, France, Thailand and Malaysia play on the english server if they cannot understand english?

Yes. And in future they can play Ragnarok in their own tongue.

7/Will the 2nd job class be introduced to the beta before the free trial ends? How about PK / Alignment?

It is under consideration as the other details and it will be changeable ifit's necessary.

Both of them are on the test now and when they come up clearly we will let you know.

9/Is the game's flow and style going to change between now and retail? Is the game more or less what Gravity wants it to be like?

As far as I am concerned details will be upgraded in many ways(Of course) but I believe the hard core of Ragnarok(The community function and cute style etc.) won't be changed.

10/Is Gravity going to sell property on the servers like houses?

The details are under consideration.

11/Can you give a brief description of how quests in the game will be like?

Sorry because it is in the development stage.

12/What is Gravity's opinion of players selling items for real money on services such as EBay similar to how they do for other MMORPGS like Everquest and Ultima Online?

We don't want players to sell items for real cash or credit.It is illegal and also they who wish to make big money with items are robbing Gravity's property not their's. They don't understand what the tester means. In our point of view we lend our property for free to them and we ask them to test Ragnarok how it is.

13/What precautions are Gravity taking to make sure that Ragnarok has a smooth launch with a well polished product (unlike World War Two Online, Tribes 2, Anarchy Online)?

We are just trying to make Ragnarok getting better and better. We believe nothing perfect and it can be fixed when we realise and try to find out.

14/What is Gravity's stance on programs that edit/modify/read the games memory and packets? What is Gravity opinion of these 4 modifications:

We already told that person we didn't want players to make any kind of emulators for Ragnarok even though they insistes it is helpfull to play.But that person didn't seem to understand or accept.Without that EXP viewer we have a plan for better system in future.

Our position is same as above.

After tests,it turned out to be useless(After each patches).Our position is same.And it's related thegleek.com and there are many hackers as far as we concerned.

This program makes tons of trouble like crashing and disconnected.The worst thing is it makes player who use bot to be able to steal the others ID and password and to change their character name so that they can cheat and behave rude in Ragnarok without any restriction.

This makes really really serious problem and we are taking a strong action against it.Also as a gamemaster I won't let them play.

15/Does Gravity plan to have a large Print and Web advertisement campaign for the English version of Ragnarok Online?

16/What is the favorite character class at Gravity?

You mean Our point of view or my point of view? Actually we like all characters because we have created them. And me I play with my level 16 theif and I'm used to play swordgirl in Korean server. Now I am feeding up my cute mage girl.

Thank you so much and Have a nice day.And Say hello to all players for me

こんにちは。 Hello. ラグナロクオンライン運営チームです。 This is the Ragnarok Online management team.

- 職業に伴う各種スキルを追加。 - Add the various skills associated with the occupation.
- それによる様々なインタフェース・システムが追加。 - We like it by adding an interface system.

- これから転職するためにはクエストをパスしなければなりません。 - To change jobs you must now pass the respective quest.

1) エンベリウムを1個消耗してギルドを作ることができます。 1) You can make a guild one Enberiumu and total exhaustion.
作る為の命令語は"/ギルド [ギルド名前]"で、ALT+Gでギルドメンバーを見る事ができます。 Language instruction for making the "/ guild [guild name]" in, ALT + G can be seen in the guild members.

3) エンベリウムは新たに加えられたモンスターの中の一部モンスターが低い確率で与えるようになります。 3) Enberiumu will give Monster a low chance of being made to the new monster.

4) ギルドシステム追加で、ギルドに関する様々なシステムが加えられました。 4) additional guild system, like we have been made about the guild system. (エンブレム、パーティー経験値、レベル、パーティースキル(未実装)など) (Emblem, party experience, level, skill-party (not implemented), etc.)

1) Noviceスキル8レベルから使うことができます。 1) Novice skill level can be used 8.
2) 相手方のキャラクターをマウス右ボタンでクリックすれば、マナーポイント追記メニューが浮かびます。 2) You can click the right mouse button on the opponent's character, append menu point浮Kabimasu manners.
3) マナーポイントの低い人は赤色で名前が表示され、高い人は青色に表示されるようになります。 3) Manners point person of the name is displayed in red, who will appear high in the blue.
4) 後に情報表示メニューが加えられて相手の性向を見られるようになります。 4) will look at the propensity of the other information were made after the View menu.

- 村にいる製錬NPCに声を掛ければ、決まったアイテムを使って製錬することができるようになります。 - The NPC掛Kere smelting has a voice in the village will be able to use the smelting certain items.

6. 組合(カード)システムが追加され、カードイラストが表現されます。 6. Unions (card) is added to the system are represented card illustrations.

- 全カードの半分ほどは能力が実装されました。 - About half of all card capacity has been implemented. カードアイテムをダブルクリックして使うことができます。 You can use double-click the item card.

8. イズルードにアリーナが追加されました。 8. Izurudo has been added to the arena. - まだ何種類かの機能は未実装状態です。 - Features several types of state is not implemented yet.

9. 霧効果が追加されました。 9. Fog effects are added. - "/fog"命令語で消したり表したりすることができます。 - "/ Fog" can be erased or represent language or instruction.

10. 何種類かの状態異常効果が追加されます。 10. Will be added to the effect of several types of abnormal conditions. - スタン : 気絶状態になって動くことができなくなります。 - Stun: you can not come to the stunning work. - 暗黒 : 画面が黒く変わって、モンスターの場合視野が狭くなります。 - Dark: black screen changed, if you narrow the field of monsters. - 睡眠 : あらゆる行動が不可能になります。 - Sleep: cannot attack or perform any action. 攻撃を受ければ目覚めるようになります。 You will awaken if attacked.

下は既存の内容で変更になった事項です。 The publication was changed under the existing content.

1. 1次スキルの何種類かのバランスが変わり、幾つかのスキルが実装されました。 1.1 changes the balance of the following several types of skills, some skills have been implemented.

- 連打回数がレベル別に制限されて、攻撃力が半分に減りました。 - Level is limited by the number of consecutive hits, attack power is reduced by half.

- 水がある地域で空き瓶を持って使用時、聖水アイテムが作られます。 - When used with a bottle of water in some areas, the item is made holy water.

- モンスターから出る効果不明のアイテムを鑑定して使用可能にさせてくれます。 - Makes them an expert is available to take items from monsters of unknown effects.

6) ルアフとサイトが1スキルでマスターになるよう変更されました。 6) and the site has been changed so that one Ruafu master skills.

- これによって他のスキルの習得条件も変更されました。 - Has also changed this condition by learning other skills.

7) テレポーテーションスキルが5スキルまでに制限され、ワープポタルはテレポーテーションLv 3で習得可能になります。 7) is limited to five Teleportation skills, Warp Portal the teleportation can be learned at Lv 3.

2. 空間移動職員はこれ以上出てきません。 2. Workers can not move out of space any more.

3. カート提供、倉庫利用、位置保存はカプラ職員を利用する事で可能になります。 3. Provided cart, use of warehouse, storage location will allow employees to use the thing coupler.

4. モンスターから落ちた装備用アイテムは虫眼鏡で確認をすると、装着と共に性能が現われるようになります。 4. Items dropped from monsters and equipment for the check to the magnifying glass will appear to be attached with the performance.

- 虫眼鏡は道具商店で購入が可能です。 - Magnifier tool is available for purchase in the shop.

6. 死んだ時に経験値が10%減小して、ダンジョンでは装備しているアイテムを確率によって落とすようになりました。 6. The death experience at the small 10% decrease, now down in the dungeon by the probability that an item equipped.

- ノービスはこの項目に当てはまりません。 - Does not apply to the Novice class.
- 落とすアイテムはランダムに0-1(2)個です。 - Items are randomly dropped 0-1 (2) pieces.
- またスキル使用直後や戦闘中は接続終了が不可能になりました。 - Immediately after using combat skills and are now also unable to close the connection.

8. 魔法詠唱速度を早くするパラメーターがAGIからDEXに変更されました。 8. The blurring of the parameters from the DEX AGI magic chant has changed.

9. ルートモンスターは無限大のアイテムを食べますが、最初に食べた10個のアイテムだけを記憶します。 9. Monster that loot items now only remember the first 10 items they ate (no more infinite item drops from poring?) 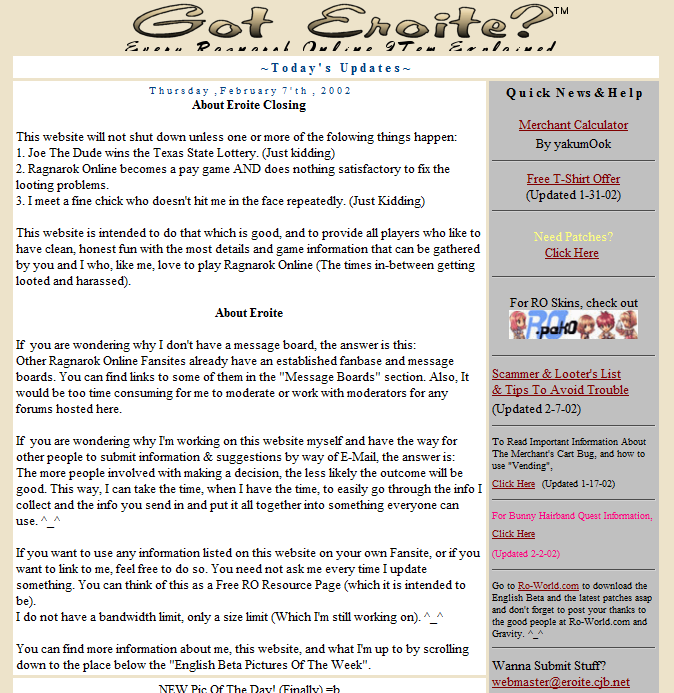