From iRO Wiki
Jump to navigation Jump to search
This quest or event is currently not implemented.
If it becomes available again, this notice will be removed.
It has been suggested that this page be deleted
Reason: This quest no longer applies to the iRO Renewal servers and there is a new version for RE:Start

1. Head off to the Pyramids, which is north-west of Morroc.

3. Once inside, follow the hallway down and take the left gate (90,115). In here you will see two NPCs that will guide you through the quest.

4. Talk to the one closest to the portal. She will ask you a few questions, then instruct you to find an "Irrelevant Man" somewhere outside the Pyramid moc_ruins140125 in order to steal mushrooms from a nearby mushroom farm. 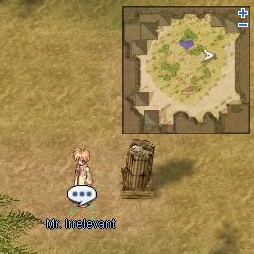 5. At the farm, kill the mushrooms and collect the mushrooms that drop. Aggressive Fabres and Chonchons (and Spores, but they're not aggresive) protect the farm, so you may want to avoid them. Your mission is to collect at least mushrooms worth of 25 points.

6. After collecting a sufficient amount of Mushrooms, head back to Thief Guild.

7. Talk to NPC farthest from the warp portal. He will count your mushrooms and if you have enough points, he will promote you to a Thief.