From iRO Wiki
Jump to navigation Jump to search
For a pre-Renewal version of this article, click here. 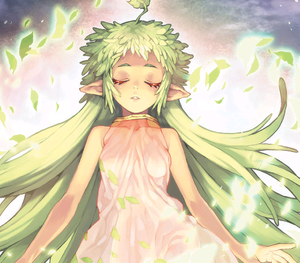 A Green Lif is depicted as the mascot of Episode 10.2 Lighthalzen update

A Lif is one of the creatures available through the Homunculus System, summonable by Alchemist and Biochemist who have completed the Bioethics Quest.

Primarily a support type among the four Homunculi, Lif is physically the weakest, and commonly regarded as difficult to level due to her lack of offensive skills and low physical attack. She is also the most expensive to maintain, requiring the consumption of Pet Food for feeding.

Like all Homunculi, Lif is obtainable in two styles, in this case visually resembling flora based life: one utilizing a leaf motif and the other employing that of a rose. Outside an aesthetic sense, there is ultimately no difference between "Leaf Lif" and "Rose Lif", as they possess the same pool of skills and general stat growth. Transforming Lif from her adolescent appearance into a mature form requires a Stone of Sage when she possesses loyal disposition towards her creator.

Given her initial lack of strong offensive attacks, and the prerequisite need of Condensed Red Potions to utilize her Healing Hands skill, Lif is optimally suited for Alchemists capable of avoiding or sustaining little damage from attacks. Thus high Flee Rate or Perfect Dodge builds will find her more viable than other builds. This does not necessarily make Lif useless to others specialists, as use of her Urgent Escape can prove to be a valuable asset when faced against large mobs or powerful opponents, but the more flexible capabilities other Homunculi provide greatly deters such an investment.

These statistics may greatly vary if evolved.