1. Journey to the Assassin's Guild, found in moc_fild16205296, two maps South and two maps East of Morroc. The entrance to the guild is located near the center on the upper portion of the island.

2. Talk to the Guildsman NPC in_moc_161933, who allows would-be Assassins into a room with another NPC as long as they are Thieves at Job level 40 or above.

3. Walk near the Guildsman at in_moc_162590. After signing up, access to the next room will be granted.

4. Once inside the room, walk forward, and hidden NPC will reveal himself. He will ask the player 10 questions about Thief and Assassin knowledge ranging from skills to cards to equipment. Nine out of ten questions must be answered correctly in order to proceed.

5. After the quiz, enter the pub for the next test. Wait your turn if someone else is already in the test area. You'll then be sent to a room filled with Porings, Drops, Lunatics and Poporings. You must kill 6 monsters of the exact name given by the announcer in three minutes.

The name will usually be "Target Monster" or "Job Change Test Monster" but may vary in different versions of RO. The target monsters also always consist of 3 Porings, 1 Drops, 1 Lunatic and 1 Poporing. Killing monsters other than the targets or falling into traps results in failing and being teleported back to the entrance NPC. Killing all target monsters will automatically kill every other monster in the room and open a portal for the next test.

You should turn off the "snap to monster" and "snap to item" options during this test, since having them on will interfere with hovering your mouse pointer over exactly the monster you want.

6. In the next area, you must run to the other side of a room filled with Mummies and Hydras. Stopping to attack monsters is not necessary. Getting to the sides of the room and going as quickly as possible is highly recommended to avoid getting mobbed. This part of the test can be made easier through good use of Hide, and is trivial if the player has a Frilldora-carded garment. If the player has learned Back Slide, this can also be used to move quickly past the monsters as well.

Once you reach the NPC at the end of the room, all monsters will die and the you may proceed to the next room. Dying results in failing the test and you will be teleported to the entrance of the guild and must retake the test. If you die, it is not required to use healing items as the entrance NPC will heal the you back to full health.

7. You will then be sent to a series of rooms that look exactly the same. There is no significance to those other than walking through the portals until reaching a large room with invisible walls. You must traverse through the invisible maze and go beside the Assassin Master at the bottom left corner of the room. 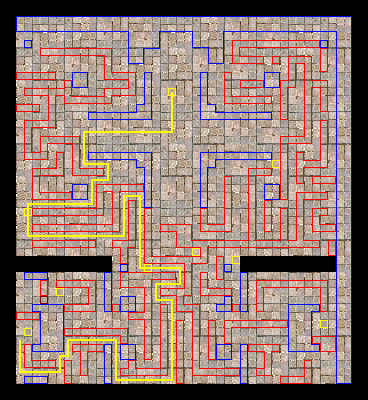 There may be blocked paths but eventually you can reach the NPC through trial and error.

If you hover your mouse pointer over a piece of floor, there will be nothing if there's an invisible wall there, but there'll be a green-square-corners "cross-hair" if it's a walkable floor. You can use this to work your way backwards from where you want to go.

You can also use the navigation tool to help the correct path. To do so, you will want to aim for the target coordinates in_moc_1614876.

8. Talk to the NPC and he will talk and ask a few questions about the pride and honor in being an Assassin. Successful Thieves are then be rewarded with a Dagger or Katar-class Weapon (depending on Job Level) or a weapon of choice (Job 50), as well as a Necklace of Oblivion (Warning: Do not sell this last item).

9. You will be sent back to the entrance of the Assassin's Guild. Present the Necklace of Oblivion to the Entrance NPC to be changed into an Assassin.

Depending on the character's Job Level, one of the following weapons will be rewarded.