A Guillotine Cross is the third job class of an Assassin/Assassin Cross. To attack enemies, they still wield two separate weapons (from Daggers to One Handed Swords) or Katars, but they gain access to new and improved ways of assassination. They can also gain access to new poisons, which other character classes have no known cures for them.

A Guillotine Cross name is often shortened and abbreviated as "GX", where the "X" is like a cross. 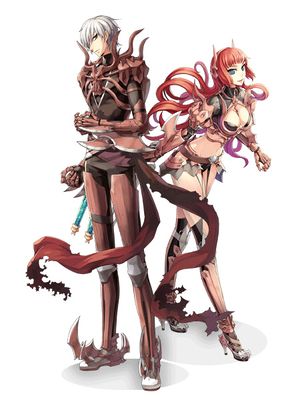 Rolling Cutter is the most effective leveling AOE skill for a Guillotine Cross. This build is a good balanced build that can use skills, CRIT, perfect dodge, or anything depending on gears used.

This build's stats are centered around the Heroic Backpack [1] garment, which is overall the best garment for PVM/MVP and sometimes PVP/WoE too. Make sure STR, AGI, and VIT are above 90 as these are crucial stats for a GX (STR = attack power, AGI = ASPD/flee, VIT = survivability) and the backpack bonuses are great for it. If you prefer to use skills more than CRIT, go for 90 DEX and 60-70 LUK. If you prefer to CRIT more and want the backpack LUK bonus, then go for 90 LUK and 60-70 DEX. VIT is set to 94 so that there is 100 VIT in total after job bonuses, which will give stun immunity. 120 DEX when combined with ranged gear is also a viable option for long-ranged MVP-ing with Cross Ripper Slasher against some MVP that have melee attack reflect.

Rolling Cutter is the first skill to get and will be the main leveling skill. Cross Ripper Slasher is very strong with many counters built up with Rolling Cutter. For leveling purposes, CRS can be used to finish off the one monster that is not killed when mobbing. Cross Impact is good for single target burst damage as well. Cloaking Exceed is useful and you will not be seen by insect/demon monsters. This build can also be used to level using Meteor Assault if the player is equipped with Enforcer Shoes. The only mandatory equipment for this route of leveling is cards or gear that prevents cast interruption. Using this skill while dual-wielding, when carded correctly will usually yield better damage than using a katar.

This build will have a good CRIT rate with certain gears like Rogue's Treasures. Morrigane's set is also good choice for the early GX levels or Assassin/Assassin Cross levels. Please note that CRIT-ing monsters one at a time is not recommended for leveling purposes and using Rolling Cutter to mob is much faster. CRIT could be useful for MVP/WoE purposes though. MVPs that have AGI-UP usually will dodge skills that depend on HIT, so this is where CRIT comes in. Buffs like Gloria will bring the CRIT rate up over 50 usually, which means over 100 CRIT with the doubled CRIT rate from Katars.

High Perfect Dodge (80+) can be easily achieved with the right gears, like Morrigane's set, two Fortune Swords, and Wild Rose Card. LUK will also help but do not get too much LUK at the beginning as the points are better spent on other stats first. If tanking a mob for your party to kill, switch from the two Fortune Swords to one Fortune Sword and a shield with the appropriate racial reduction card (Thara Frog Card, Khalitzburg Card, etc.). Switch back to two Fortune Swords to pull and mob the monsters together.

A Specialty Jur [4] with four Hunter Fly Cards, Jur [3] with three Hunter Fly Cards, or Crimson Katar [2] with two Hunter Fly Cards is useful with Rolling Cutter for leeching HP back. The player can stack this with other leech gear to increase the chance of leeching HP/SP. At level 120, the player can switch to Thanatos Katar [1] for better damage and built-in HP/SP leech. For DPS purposes, use a Durga [1], KVM Katar (Glorious Bloody Roar/Glorious Jamadhar), or Crimson Katar [2]. KVM Katars are good for attacking even non-Demi Human monsters due to the 193 ASPD proc.

This is more of an endgame PVP/WoE build and is not a leveling build. To optimize ASPD, HIT, and ATK, focus on balancing the STR, AGI and DEX stats. This is because it is indispensable to have quick attack speed along with adequate HIT so that attacks will not fail. VIT is also needed for survivability.

This build focuses on single target critical hits (CRIT), and is not a leveling build because it does not have HIT for AoE skills. Critical hits deal about 40% more than regular attacks would. This build relies a lot on LUK. Every three LUK gives one CRIT. When using katars, crit rate is doubled (not shown in stat window) so it is possible to achieve 100% crit rate with just 50 CRIT. It is advised to get a bit more, however, because the target's LUK will lower your effective crit rate. Effective crit rate using katars = 2xCRIT - (target's LUK/5). 125/126 LUK is mainly used for Ring of Jupiter / Perverse Demon Mask bonus.

This build is mainly used for single target DPS on MVPs, but can also be applied for PvP/WoE as well. This build is PURE critical, and is only applicable to endgame uses. Leveling builds require HIT to use AoE leveling skills and 1 DEX is not adequate for AoE purposes.

The player may opt to use this stats build for leveling using Rolling Cutter or Meteor Assault when having access to equipment that grants Hit like Phreeoni Wings or Skin of Ladon.

This build focuses on dealing critical hits on a single target (CRIT) using two daggers. This build is mainly used for single target MVPing/PvM as it relies on auto-attacking (Ctrl+Click, or /nc). The main goals are: 1) Reach 193 ASPD (through AGI, gears, ASPD-modifying consumables, and buffs (such as Cantocandidus)]; 2) Make your CRIT greater than 100 [from stats, gears, CRIT-modifying consumables, and buffs (such as Gloria)]; and 3) Deal enormous damage (through STR, overupgraded weapons, cards, etc.)

Your stats should look more or less like this once you reach Base Lv. 150:

And at Base Lv. 175, your stats should look more or less like this:

For most of the time, your main weapons are not katars (dual daggers, DUH!). Instead, you will be spamming Enchant Deadly Poison and auto-attacking lone targets most of the time. Make sure to max both Righthand Mastery and Lefthand Mastery. But then, you will be forced to switch to katars when facing groups of monsters. Thus, it is recommended to level up with maximum STR, AGI/VIT, and DEX (refer to the Rolling Cutter/Cross Ripper Slasher Katar Build above), and reset your stats to a DD-CRIT build once you either reach Base Lv. 175 or when you have gathered decent gears for a DD-crit build. But if you have gears that are optimized for Perfect Dodge, then you might as well act as a "Perfect-Dodge Tanker" in leveling-oriented parties and continue allocating your stat points as described above.

Can use the katars listed above as well as:

For the most part the same as Katar Crit with the exception of...

Card Options for Off Hand:

No Assassin Handcuff because not using Krishna/Chakram 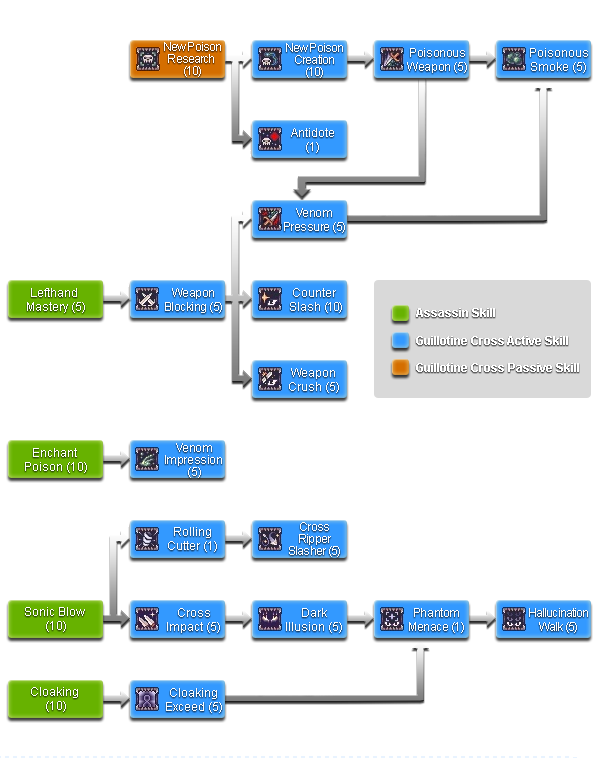 The job levels in which a Guillotine Cross receives a certain bonus: