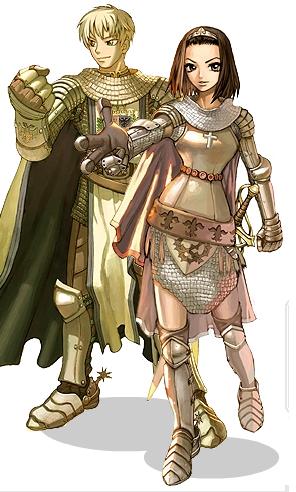 The Knight class is the primary second job for the Swordman class. Being a hack and slash type of character, Knights are granted access to a new mastery that will open a new type of weapon to wield aside from the Swordman's swords. They are also allowed to acquire powerful AoE skills like the famed Bowling Bash and the spear exclusive skill, Brandish Spear.

Changing into a Knight from a Swordman requires the player to complete a number of tasks:

After completing these tests, the player will be transformed into a Knight. All this takes place inside the Prontera Chivalry (Prontera xx, yy).

These knights try to get the best of both realms. By having a good chemistry of AGI and VIT depending on the user's playing style, they gain survivability in some areas while losing it in others. Hybrids are denoted by which stat is the highest. AGI-VIT Knights usually stick with a setup similar to an AGI knight. VIT-AGI Knights, likewise, generally stay with the setup of a VIT Knight.

Every Knight should have medium to medium high VIT for surviving against mobs (flee is reduced once more than one monster attacks the player). However, even for pure VIT / AoE builds, AGI is also helpful for less delay between each Bowling Bash cast.

SVD Knights (STR/VIT/DEX) are a classic, effective Knight build that is still one of the most useful builds. An SVD Knight is great for AoE leveling with Bowling Bash or Brandish Spear (Spear weapon only). In single target situations, the SVD Knight is especially effective on Large sized monsters utilizing Pierce.

INT is a variable stat, and generally Knights do not rely on SP regen and instead use Equipment or Cards that can leech SP back, like Earth Deleter Card. AGI is not for defense when being attacked by multiple monsters (due to the FLEE penalty) and its main purpose is to use Bowling Bash or Pierce at a faster rate because of the ASPD.

AGI Knights is usually recommended for newer players without funds. They have high ASPD and FLEE for quick single target killing, so it uses minimal HP / SP Healing Items. Their main method of attack is melee-ing single monsters with Twohand Quicken, which increases ASPD by 30%. When faced with multiple foes, they still have the option of using Bowling Bash.

Eden Group Equipment is free and a great place to start for gear to use. The Spear is a good weapon and generally a good choice for a Knight and their future classes' use, but some may opt for the Two Handed Sword for cheaper single target leveling with Two Hand Quicken.

Knight Spirit enables use of

The Levels in which one receives a certain bonus