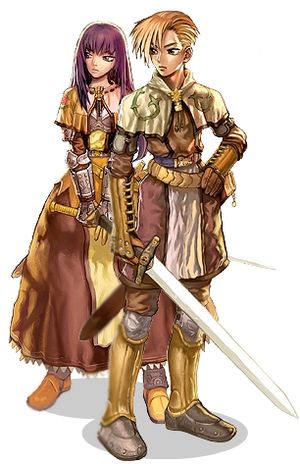 Swordmen are strong-willed fighters seeking to lead with their sword and shield. Though stubborn like the waves of the sea, swordmen are able to use their high attack skills to change the tide of the battlefield. Growing up in Prontera and its nearby town Izlude, they have learned that the best defense is the best offense.

Swordmen tend to have high ATK from swords and their skills boost the damage of these weapons. They can wear heavy armor and shield to boost their DEF and their high HP pool from skills and HP bonus significantly help with tanking mobs.

a. Gameplay:
This build requires you to walk around, gather mobs of monsters, and then kill them all using Magnum Break. You may have to use Provoke to attract monsters to you. Use gear that increases your DEF, HP, and SP pool. You will use several HP and SP recovery items for survivability but teaming up with an Acolyte for heals can help avoid using HP recovery items.


b. Stats:
Base level 40 base status distribution suggestion. You may allocate certain status points depending on the monster you are killing, your survivability, skill playing the game, and planned character build later on. If you find yourself missing monsters, add more DEX to give you HIT.

a. Gameplay:
This build focuses on killing monsters one at a time using 1-2 hits of Bash. Ideal monsters to kill for this build are passive monsters such as Willow or Bigfoot.


b. Stats:
Base level 40 base status distribution suggestion. You may allocate certain status points depending on the monster you are killing, your survivability, skill playing the game, and planned character build later on.

Below are three ideas for efficient leveling strategy:

It is vital that you understand how each status affects your character to play the game well. Below is a summary but go to the Primary Stats page for detailed information.

Complete the Eden Group Equipments Quests to obtain free equipment for your class. These equipment are sufficient to get you to level 99.

After creating a Novice character, follow the Enchanter Mounds Quest guide. This will allow you to enchant a

Cotton Shirt that you get the moment you created your Novice character with Max HP+100, Max SP+50. You will be talking to Almond J in Izlude Izlude108139.

The following weapons are sequenced from the fastest to the lowest ASPD and lowest to the highest ATK generally.

b. One Handed Swords

Skills can be rest any time, go to Skill Reset for the guide.