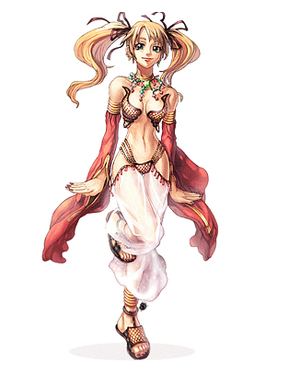 Everybody loves the Gypsy's dancing, especially her enemies. It's the last thing they see before they go to their graves with a smile on their lips and an arrow through their hearts. The Gypsy is so alluring that hundreds of acts of heroism (and foolishness) have been performed in her name. With more lithe and agile bodies granted by the gods, Gypsies are hard to resist especially when one begins her dance. Not a single drop of sweat can be seen. Every dance and movement seemingly effortless. Graceful dance is her specialty, dancing gracefully to lure the monster to its death with the newly acquired Arrow Vulcan and Tarot Card of Fate skills.

To become a Gypsy, you must find a book called 'the Book of Ymir' in 'Sage Castle', Juno. The book will lead you to Valhalla so you can change your job through the Gypsy Job NPC. Also you must reach at least Job Level 40 as a Transcendent 1st class character. Reaching Job Level 50 first is strongly recommended, as the player will never be able to recover the extra job levels / skill points after the job change.

See Wanderer Builds for build strategies to work towards. See Dancer Builds for leveling strategies for just the Gypsy leveling stages. Leveling a Gypsy is similar to a regular pre-trans Dancer, but with a few new skill additions.

Arrow Vulcan: A single target ranged attack skill that requires a Whip be equipped to cast. This skill is quite powerful, and if using the right whip, can kill most enemies in one or two shots early on. Another bonus to using this spell to level is that a shield can be equipped for damage reduction since Whips are one handed. The downside to this skill is that it has a long skill delay between casts and that it cannot be cast while performing songs.

Marionette Control: This is useful and frequently used for any brewing type of situations like an Alchemist's Potion Creation. Very serious potion brewers will create a Minstrel or Gypsy (or even a level 150 Maestro / Wanderer!) purely as a "slave" for brewing with high LUK, DEX, and INT.

Tarot Card of Fate: This skill can be very useful in WoE. Under the effect of Magic Strings it can be very spammable. Not only can this be cast through Pneuma, it also cannot be removed by enemies. It is highly recommended to memorize the cards. This way the player can continuously use the skill until a Death Card comes up.

Sheltering Bliss: This skill can be used in front of a portal in WoE to disable enemies. Worth maxing if using this character for WoE.

Hermode's Rod: This skill's debuff is generally not worth using and it can be a pain to use in WoE.

Longing for Freedom: This skill can be somewhat useful when pairing with a Bard class, but requires some practice to use properly. If moving too far from the other performer, the skill will cancel. Generally not worth investing points into.

Most transcendent characters will have already completed some Eden Equipment quests already and can reuse the equipment. If the character has not done the quest yet, they can do it as a transcendent character as well. The Bow is a good weapon and generally a good choice for a Dancer due to the high ATK. A Dancer does require a Whip to play songs, but any regular Whip will work for this.

This combination will give you a 50% increase in damage, greatly raising your Double Strafe and Arrow Shower output

This is the best weapon to use for Gypsy's that plan on learning the Arrow Vulcan or Slinging Arrow skills. With slotting certificates, 2 slots can be added to a Queens Whip to allow room for Archer Skeleton cards (additional 10% damage for each card). This weapon can also be enchanted with Expert Archer enchants from Malangdo (for a total of +40% extra ranged damage in addition to the 10% extra damage that the weapon already gives) making it a formidable weapon for casting Arrow Vulcan or Slinging Arrow.

With +9 upgrading, this garment allows for 3 Expert Archer enchants which give an additional 30% ranged damage

Gives 20% increased SP and HP which is extremely helpful

ASPD values do not change after transcending. See Dancer (ASPD).