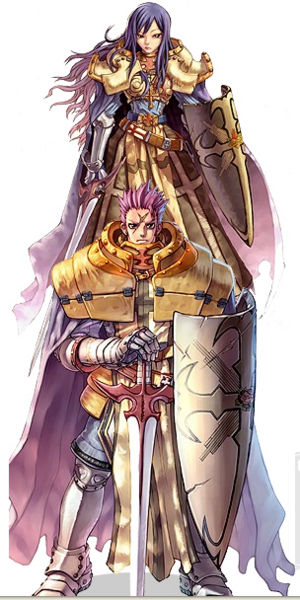 Crusaders are a fine blend of physical strength and faith-driven magic prowess, making them a versatile class. They are capable of melee combat with a spear or a sword and shield, of playing a supportive role in parties with beneficial magic skills, and of sacrificing their health to wield powerful holy magic. Knowing this, they can be built more like a mage than a warrior, or a classic favorite is to play the crusader like a tank. What makes this class so popular is the versatility, it's natural aim towards fighting the undead, and its centralization around having high VIT and defense.

Changing into a Crusader from a Swordman requires the player to complete a number of tasks:

After completing these tests, the player will be transformed into a Crusader. Most of this takes place inside of the Prontera Castle.

There are a few primary builds of Crusaders, although there are enough skill points to become a mix of the builds:

Grand Cross, which is often abbreviated GC, is a skill that relies on both the Crusader's ATK and MATK to deal damamge to the enemy. Getting both STR and INT is recommended for higher ATK and MATK, which also helps with Weight Limit as well as SP Regeneration. VIT is important for mobbing multiple monsters to level. DEX is important to a Grand Cross Crusader because it reduces cast time.

Holy Cross is a powerful single target skill with a low SP cost. Two handed spears are recommended for leveling with this skill for double damage.

A popular build for newer players without as much funds. The AGI sader focuses on single target meleeing, as opposed to the other builds that focus either on AoE mob training, single target skill spamming, or party support. This means that fewer HP / SP Healing Items would need to be used. The AGI in this build also applies to a Crusader's 3rd job role: the Royal Guard, which takes advantage of the ASPD for a powerful single target skill, Vanishing Point. Players can choose to use CRIT gear to bring out more damage in this build, as it benefits greatly due to its attack-speed boosts.

The player can also choose to use the Pantie / Undershirt combo or the Fricco's Shoes / Odin Blessing / Falcon Muffler combo, if the player cannot afford a Morrigane's Manteau.

There are end-game Royal Guard builds that are built as pure Sacrifice, but for a Crusader, this is more used as a very helpful utility skill for protecting the squishy classes in the party. Sacrifice should not be seen as a "build" but just another skill for Crusader class characters to acquire (it is actually so helpful to parties that every Crusader / Paladin / Royal Guard should invest at least one point in it). Crusaders are more concerned with leveling as quickly as possible, so it is recommended to utilize one of the leveling builds that are able to solo or kill monsters on their own. However, Sacrifice is very useful in party situations and any offensive build is able to fit this into their skill build. High VIT is recommended for a higher HP pool to take more damage.

In order to gain the best DPS with a Soul-Link, 182 attack speed is the ideal. This has to do with the animation delay of the skill. Nothing more than 182 attack speed will help when using Linked Shield Boomerang.

Also remember to use heavier shields to achieve more DPS using Smite and Shield Boomerang; it adds to the damage when using those skills. The weight does add to the total damage.

Eden Group Equipment is free and a great place to start for gear to use. The Spear is a good weapon and generally a good choice for a Crusader and their future classes' use.