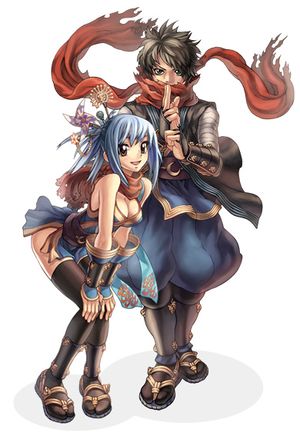 Ninjas are an expanded class that cannot be rebirthed or adopted. Because of this, Ninjas are granted 69 skill points to distribute. They do however have follow up jobs: The Kagerou (male) and the Oboro (female) which take their roles as ninjas much farther and make them much more powerful. Kagerou and Oboro are able to wield a weapon in each hand (dual-wield).

The ninja class is fun and offers three types of roles to play: a magic ninja, a throwing ninja (now nerfed to be the weakest of the builds), and a melee ninja. Ninjas excel in the art of evasion with skills like Cicada Skin Shed and Mirror Image which prevent almost all non-magical damage from harming them. Their magic tree offers several fun spells that are unlike that of any other class (although nowhere near as powerful as the Wizard class spells).

This class is not recommended for new players, as it is expensive to play. The magic and throwing ninjas require materials to cast all of their spells, thus attention should be paid to choosing profitable targets.

Now the more viable build due to recent nerfs, this build is similar to a Mage or Wizard, but has its own set of unique skills to take advantage of. Magic Ninjas raise their DEX and INT to make the best use of their skills. Importance of maxing DEX and INT are emphasized due to the poor cast times on the majority of spells and the lack of magic boosting items for the ninja class. The rest of the points can be used to raise some LUK for additional damage output. The majority of ninja skills all require catalyst stones which are sold by an NPC in Amatsu. Their primary damage skills are Freezing Spear/Blaze Shield and Exploding Dragon, with First Wind and Snow Flake Draft also being an option. Cicada Skin Shed is essential to increase survivability, while Ninja Aura gives a minor boost to INT.

While not the strongest damage dealers, Magic Ninjas still deal respectable damage and can easily drop unprepared opponents. Blaze Shield is good for slowing down monsters and players, Freezing Spear for harassing targets with its rapid hits, and First Wind is an AoE spell that hits targets over Magnetic Earth. Cicada Skin Shed helps offset the low HP Modifier, but Magic Ninjas have to be careful of skills such as Soul Destroyer that will bypass their Cicada Skin Shed, along with status effects.

Of the different Ninja builds, the Magic Ninja is now the fastest leveler due to their ability to mob with Blaze Shield and Exploding Dragon.

No longer the most useful of the 3 builds, throwing builds attempt to capitalize on the Ninja's throwing skills. Throwing skills are based on STR for damage, so this is the primary stat. DEX is needed for Hit rate of Huuma Shuriken, and to reduce Throw Huuma Shuriken's cast time. Throw Huuma Shuriken is also SP intensive, so a decent amount of INT is recommended. Remaining stat points go into either AGI or VIT, depending on whether the Ninja is for PvM or PvP/WoE.

Throwing builds are harder to work with, and after the recent nerfs to the ninja class, are not recommended. Throw Shuriken is a quick and cheap skill, that with enough ASPD can be used quickly in succession to make up for its lower damage. Throw Kunai was once the most powerful pre-99 spell in the game, but now does very low damage output with a terrible aftercast delay that leaves players vulnerable to attack. Throw Huuma Shuriken is the Throwing Ninja's AoE damage skill, but with an intensely long cast time and delay that makes this skill almost completely worthless without a tank. This build performs poorly in PvP and WoE situations where opponents have more DEF and you don't have an Element advantage as often.

If zeny is no object, it's possible to build around Throw Coins(which may be the only viable build left for the Throwing Ninja build), but otherwise it's not recommended as the price will build up rapidly with regular use. 'Throw coin' builds leveling speed is faster then Magic Ninjas.

Melee ninja is the 'for fun' build of the ninja class due to the fact that melee ninjas tend to be the most difficult to level. This is mainly due to the high SP costs of skills. Its common for melee ninjas to pick up one or two skills from the throwing ninja skill tree, such as Throw Shuriken, Throw Kunai, or Throw Huuma Shuriken, which tends to make leveling easier.

Melee ninjas get STR for dmg, AGI for speed, Vit for survivability due to poor flee, and the rest into DEX and INT. Due to the high SP cost of skills a decent amount of INT is recommended. Some ninjas choose to get some LUK to aid the skill Shadow Slash which has a natural 50% chance to CRIT, and every 3 LUKs also increase Atk by 1.

This build poorly tries to copy the style of the assassin class while utilizing the ninjas own skills. Unfortunately though the ninja doesnt get the flee bonuses of the thief classes, so it relies on evasion spells and stealth attacks instead. With the proper Auto-Cast or Crit gear, this build can be fun if the player is looking for something similar to the assassin type of gameplay

In general for all Ninja builds, a Fortune Sword is a notable weapon for using Perfect Dodge in combination with Cicada Skin Shed. The Kagerou and Oboro are able to dual-wield and thus may equip two fortune swords. Equipped with this and possibly other Perfect Dodge gears and cards (such as Yoyo-carded accessories), a Ninja can be used to drag high-attack monsters with little risk, but must still be careful of magic and monsters' elemental attacks. With two fortune swords and a pair of yoyo-carded accessories, this provides an additional 51 of Perfect Dodge.

Aside from being able to equip most dagger type weapons, Ninja's are also able to equip Ninja-class only daggers, some of which are available through item quests.

Ninjas wear mostly light-medium DEF armors, including the general armors such as Mantle/Coat/Formal Suit, and several of the Thief armors such as Thief Clothes and Ninja Suit. The Ninja Suit can combo with the Shinobi Sash to help reduce the Ninja's SP consumption. The Pantie + Undershirt combo can be useful for AGI Ninjas to compensate for the lack of Flee boosting skills. Being an Expanded class, Ninjas cannot wear any gears that are labeled as being only for Transcendent classes.

See Ninja Equipment Quests for information on how to make Arm Guards.

Ninjas have two types of ammunition: Shuriken and Kunai. In addition, certain Ninja skills require catalysts that can only be purchased in Amatsu.

Used for the skill Throw Kunai but have to be manufactured, unlike Shuriken which can be purchased from the NPC directly. Only Ninjas can make Kunai through an NPC at the Ninja Guild in Amatsu.

Using a Merchant with a Discount skill is a common practice to Conserving Zeny while buying Catalysts.

A Run-down On The Ninja's Skills

Dagger Throwing Practice - This skill raises shuriken damage. useful if player is going to be leveling with only throw shuriken

Throw Kunai - Was once a powerful spell, now does very low damage and has terrible cast delay.

Throw Coins - Now considered the ninjas most powerful throw spell. Only recommended for players that are financially well off.

Flip Tatami - Useful against ranged attackers, but player most likely wont use it often

Shadow Leap - Primary attack spell for melee ninjas. This one is fun to use because it gets you to enemy fast

Shadow Slash - Must have for melee ninja

Mirror Image - Useless. requires player to cast ninja aura first and does almost same effect as Cicada Skin Shed and does not stack on top of Cicada skin shed.

Blaze Shield - One of the magic ninjas primary leveling skills. Creates a low dmg fire circle around the ninja.

Watery Evasion - This one can be very useful, but players will have to find proper use for it

Lightning Jolt - Very hard to target and slow cast time, but fun to use

Ninja Aura - raises INT. so semi-useful for dmg boost, but has slow cast timer and must be recast all the time

Ninja Mastery - MUST HAVE for any ninja build. NINJA spells are very sp intensive. this keeps you going

Killing Stroke - Useless attack that completely drains player of all hp for a mediocre dmg attack. Cannot compete in post-renewal mechanics and will only get player killed. Also very terrible in pvp due to players resistances. YOU WILL DIE if you try to use this in PVP.

Ninjas have three primary branches of skills: Throwing, Deception and Magic. The player can opt to master one branch, or mix elements from two branches. They also have the sub-branch with supportive skills, and an "Ultimate" skill.

Throwing skills rely on the user's STR for damage, while Magic skills use INT, meaning that these two branches are rarely mixed. Deception is a mix of evasion skills and attack skills, and usually all Ninja builds will include Cicada Skin Shed due to its usefulness in avoiding attacks.