Note1: You can not reenter this instance if you happen to exit this instance before the instance done (e.g. disconnected, died then respawn). It is suggested to bring Token of Siegfried in case you die on the middle of the instance.


Note2: Although the quest itself doesn't offer an Item Reward, all the enemies inside this dungeon have the chance to drop Food Items Lv3 to 7 (+7 Foods are only dropped by Doyen Irene)

Note3: All monsters in this instance are either Demi-Human or Beast, being the first the most common. None of them uses skills: only melee.

To start this quest, you have to use the Dimensional Device located on Rune Midgard Allied Forces Post within the New World. It will warp you into the Dimensional Gorge.

1. Talk to Leon the Adventurer in Dimensional Gorge to start the quest 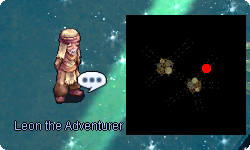 2. Click on Dimensional Device and select "Boot up device"


3. When instance is ready, click on Dimensional Device again and select option 2 to enter. You have 1 hour to complete this instance.


4. Talk to Sara Irene to start (Story starts with conversation between Sara Irene and you taking place and later Doyen her father appears before long. After Sara and Doyen disappears, Strange Oldman A and B conspire plot toward Sara)


5. As soon as all the conversations end, walk toward the nearest warp portal on your left and you'll appear on the upper left corner of Payon town.


7. Continue to look around for Sara Irene and defeat those monsters. You should be moving in direction as below: