From iRO Wiki
(Redirected from ET)

The Endless Tower is an increasingly difficult set of challenges. Participating parties make their way up the 100 floor tower, with a special boss encounter against Entweihen Knothen on the 100th floor, and Naght Sieger afterwards. These battles function similar to the Izlude Arena, with players being required to defeat all monsters on a particular floor before the door to the next can open. Once on a floor, players are unable to go backwards; thus the only ways to leave the tower are to die and respawn, use a Butterfly Wing, or walk into a Warp Portal.

The following skills are disabled inside the tower:

There are no item use limitations, although items that cast one of the restricted skills will fail (such as Fly Wing). Usage of the Kafra Shop item Token of Siegfried is still possible within the dungeon.

This quest or feature has been modified on iRO.
Not all information here may be the same for you if you are playing on a non-iRO server. 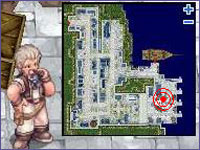 2. Listen to him and agree to be his first mate so he will bring you to the Endless Tower Island.

3. After reaching the island, your party leader must speak with the Tower Protection Stone. They then must generate the Endless Tower Dungeon instance.

If a player is forced to leave the tower, they can re-enter by talking to the stone on the Misty Island again. An Ashes of Darkness will automatically be subtracted from the player's inventory. If the player has no more Ashes of Darkness remaining, he will not be able to reenter. The exit portal on the 1st floor will warp the player to the 51st floor if they have cleared the 50th floor.

The Endless Tower instance lasts until the party either gives up or runs out of time, after which time all players will be teleported out of the dungeon.

There is no limit on how many instances a party can create within the 4 hour limit. A new instance can be created under a different party leader if the previous instance was destroyed. Once the time limit is up, there is a 6 day 20 hour cooldown period for all party members in which they cannot enter a new Endless Tower instance. However, additional instances will not allow access to additional MVPs.