From iRO Wiki
(Redirected from Taekwon Kid)
Jump to navigation Jump to search
This page has been marked as being in need of links to other iRO Wiki pages. 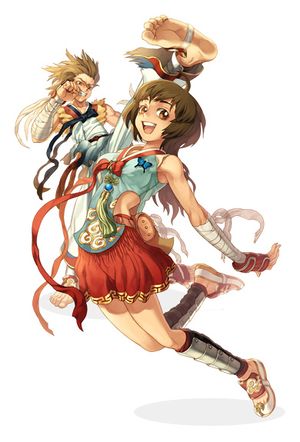 TaeKwon Kids are practitioners of the art of TaeKwon-Do. They fore go the use of weapons and instead specialize in a variety of kicks. Their equipment is limited to equips that are usable by all jobs except novices. However, there are a few exceptions to this rule (i.e. Manteaus and Boots can be equipped by them).

TaeKwon rankers are permanent first class characters, utilizing the bonuses from the TaeKwon Missions/ranking system to maximize their potential. Rankers must complete TaeKwon Missions (see link below) in order to become and stay ranked.

For a ranker, Agi serves 3 purposes. First is flee. Second is to trigger one of your stances (when you are 9x ranker, you will have all 4 stances active). The third is that once you have started kicking, Agi does, in fact, speed up the rate at which you kick. The kicks have an ASPD-based cooldown, and the higher your ASPD, the faster you can spam your kicks.

If you are WoE or PvP minded, getting vit at higher levels to create a hybrid build is a good idea.

Do not forget that you can get +10 str through spurt status.

This build relies heavily on aspd and flee to get the job done. You should be able to achieve 200+ flee easily, and can solo where most agi characters can go.The little bit of int is for regening sp once you become ranked. Spamming kicks, even though only 2 sp, eats at your sp slowly. You will be susceptible to stun and will be very fragile in pvp, defensively. You will also find that, as a 9x ranker, pots are mildly ineffective, relative to your maximum hp. (Since healing efficiency relies largely on your vit). Recommended starting kicks: Heel, Counter, and/or Roundhouse.

This build is designed to do decently in PvM and pvp/WoE situations. For PvM, the build can hit 180 flee, with high damage per kick. Dex is raised to deal with agi classes. Compared to the Pure PvM build, this build will generally take a little longer to start your combos, but makes up for that with a tougher defense. Recommended starting kicks: Heel, Counter, and/or Roundhouse.

This build is designed for purely PvP or WoE. High vit increases survivability, while sacrificing speed. Decrease in speed does 2 things: Delays the time it takes for a stance to activate to start comboing, and slows down emp breaking time (the active kick skills do not work on the emp, thus it cannot be combo'd). For emp breaking, The Hybrid build is probably better overall. Recommended starting kicks: Tornado and Counter. Vit chars tend to mob more to level, so tornado speeds up mob killing. Counter kick is there for a stronger kick. It was chosen over roundhouse because roundhouse will knock surrounding monsters back and stun them, putting them out of range for the follow up tornado. If you are not mobbing, Heel Drop and Counter kick are recommended.

Although the build might do better its job in PvP/WoE, note that doing your TaeKwon Missions to stay ranked, will become harder. The build lacks flee and although you have more defence, overall you will take more damage while doing a TaeKwon Misson.

In general, a ranker's skill build should have the following:

Choosing your 2 kicks is important. You will have these 2, and only these 2, until you become 9x and ranked.

To maximize your damage output on a single target, get counter and roundhouse (both are 400% damage kicks). Counter gives you 100% hit, and roundhouse has a high chance of stunning any monsters around you that you arent targeting.

To control the damage you receive as much as possible, get Heel Drop and Roundhouse. Once you get practice, you can delay use on your heel drop to keep the monster in a permanently stunned state, leaving you virtually undamaged. Using Roundhouse will stun the other monsters attacking, and knock them back. When they unstun, they may aggro someone else on screen.

Heel Drop and Counter Kick is another combination you can use to control incoming damage. While the 100% hit from counter isnt necessary if the target is stunned, counter's effects are much more predictable than what happens to the other monsters after roundhouse stun finishes.

If you have a tank/HP slave and/or are a pure vit build, tornado kick is recommended, since you have the ability to mob better than an agi class. It would be good to pair the 300% AoE tornado with a 400% kick. The advantages and disadvantages of Counter Kick and Roundhouse kick have been explained.

Once you are 9x and ranked all the kicks will become available. It's however recommended not to use all kicks. Best is to make a choice again between 2-3 kicks depending on the situation, see above. However, don't forget to prepare always all the 4 kick stances. It will trigger your kicks faster, even if you do not use the right kick at the right first stance. Example: if you have prepared 4 stances but you use only 2 stances, the other 2 stances will still trigger the 2 stances you use.

First off, you should get your 2nd kick last. Pick the one that you think would be more useful, and get it earlier. Heel drop is a solid top choice since a lot of monsters you will face will stun, allowing you to get free hits in.

Sprint should be the first or second skill you get. You dont have to get it maxed right away, but it helps for sp cost (if you have no sp gear). Since TaeKwons get no weapon, their damage is very low early on. Sprint compensates for this. Merely having the skill gives you defense-bypassing damage, more than low-to-mid levels of str will ever give.

Mild Wind should be after sprint, but its your choice on whether to get a kick first. It is recommended that you stop Mild Wind at 4 at first, then work on another skill (your kicks), especially if you are already ranked. Being able to combo spam kicks is more valuable than having shadow endow. This is because, for the most part, you will not be encountering any monsters weak to holy, shadow, or ghost before job 50 (few exceptions include zenorcs, low level undead that are also weak to fire, and thief bugs)

When you are working toward Mild Wind, get Kihop maxed first. This will unlock Taekwon mission early, as well as give you atk bonuses. When you're leveling on a map, ask people you run into if they wouldnt mind partying for your kihop (they dont have to be taekwon classes to affect your kihop). Most soloers will be nice and accept it. If you happen to run into the few jerks who won't, dont waste your time begging.

TaeKwon Kids are limited to headgears usable by "all classes except novice". However, some items have an extra bonus for Taekwon class:

TaeKwon Kids can wear all footgear usable by "all classes except novice" and Boots.

TaeKwon Kids are limited to "all classes except novice" armors.

TaeKwon Kids can wear all garments usable by "all classes except novice" and Manteau.

TaeKwon Kids can equip all accessory usable by "all classes except novice".

Stances must be toggled to use their corresponding kicks. The exception to this is Tumbling being toggled to use Flying Kick, though due to their secondary functions they still should be categorized as such.

Kicks are the TaeKwon Kid's damaging attacks. Their respective stance must be toggled. The exception to this rule is that Tumbling does not have to be toggled to use Flying Kick.

These skills do not fit into the above categories.

Happiness is a special status achievable by Taekwon-class characters by sitting next to each other and using the /doridori emote. It has no intrinsic bonuses, but entering it has a chance of wiping a Taekwon Master's Solar, Lunar and Stellar designations. Also, the skill Happy Break gives a high chance of Earth Spike Scrolls not being consumed when used.