From iRO Wiki
(Redirected from Soul linker)
Jump to navigation Jump to search
This page has been marked as being in need of links to other iRO Wiki pages. 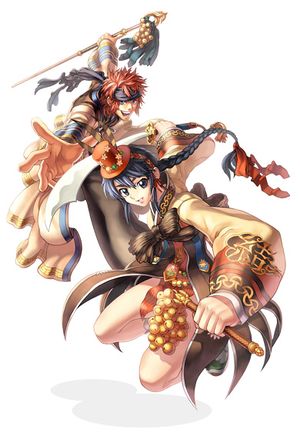 Soul Linkers give up the ways of TaeKwon Do in order to develop and refine their spiritual powers. Calling upon the power of their ancestors, they can use various Spirit Link skills to enhance the abilities of other players as well as use fancy looking offensive and defensive magic.

Soul Linkers, despite their base being a melee class, are magic casters. Compared to Wizards and Sages, their spells are severely limited on what they can be used on, however, thanks to Mild Wind they can use powerful Holy, Ghost, and Shadow magic attacks, something that Wizards & Sages don't have. Depending on their skill build they must sacrifice something in one aspect or the other of the game, limiting them to only two choices out of PvM or PvP & WoE options. Although casters, Linkers, like Sages, can go melee.

They have relatively low HP, but better SP than average. Despite the high SP pool, their spells cost a lot of SP, so INT is often a high priority. On the other hand, many skills do not have extensive cast times (usually at higher levels), resulting in a lower need for DEX compared to other magic-using classes. With some VIT and their defensive magic, coupled with TaeKwon Kid's Tumbling, they can be quite good tankers.

A unique thing about Soul Linkers is that they are naturally immune to Dispell.

This build is unique in that it uses a Linker's ability to equip and fight with daggers. Usually they equip a carded Gladius[3], or a Dagger of Counter, while using Mild Wind to maximize their damage. The stat distribution shown above can be adjusted as you wish. You can go less STR but more AGI (hence having higher Aspd but lower damage) or more STR but less AGI (hence lower Aspd but having higher damage). The INT and DEX stats are slightly dependent on your budget. Usually those who can't afford a Dagger of Counter (which may be expensive in some servers) need more DEX as they tend to use a carded Gladius[3] instead, and thus require more DEX to gain more HIT so they can hit monsters. This comes at the cost of having less INT (which means you depend on Kaina for SP even more). If you can afford to buy a Dagger of Counter, you can go less DEX as Crits ignore your Hit and the opponent's Flee, and you can go with higher INT (which means more SP to use buffs and for Kaahi). You also can get more VIT by sacrificing DEX, but only if you use Dagger of Counter. Otherwise, if you need VIT, you better sacrifice another stat. The odd amount of INT & DEX are because Linkers get +12 DEX and INT Job Bonus, thus having Base INT & DEX that ends with 8 will round it up, and the above stats takes only Job Bonus into account. Same applies to the odd VIT ending in 4, this is because Soul Linker gets +6 VIT Job Bonus. As for Skills, you can mix Spirit skills with Ka- skills, and maybe a few points on some non-damaging Es- skills like Eske or Eswoo. Or you can go full Spirit skills or full Ka- skills. Maxed Kaina is good for boosting your SP, since a Battle Linker tends to have lower SP pool, and therefore would have problems with constant usage of Kaahi and Mild Wind. Also, there might be times when you have to go support your friend instead of dealing damage - the SP boost from Kaina helps in this case.

This build is obviously used to maximize Esma damage combined with Mild Wind within the shortest time. As shown, this setting allows the linker to be the primary damage dealer within the party. Agi and Vit aren't needed as this is damage-only. Just stand behind the tanker quickly casting Esma over and over to help get things going. The 9 Str is just for a higher weight limit to carry whatever items are needed. This build decreases Esma cast time and delivers maximum damage, but also drains sp faster. To overcome this shortage it is best to have the skill Kaina to increase maximum sp and cut Es-type skill cost as well as having a priest cast Magnificat on the party, or using sp related equipments (Ex. Morpheus's Shawl), cards (Ex. Sohee Card) and potions (Ex. Blue Potion) to last longer.

Mainly the same as the Dex Bolter type, but allows for tanking big monsters with heavy skills and completely heal with normal hits after. They don't need high Dex, because Esma Base-cast time is pretty low anyways.

This is a mix of Dex Bolter and Vit Bolter combining fast casting and middle-level tanking skills.

This build is an extraordinary one. They level - like the other bolters - with Esma only, but instead of getting hit and automatically get healed by Kaahi, they dodge 95% of normal attacks and don't "waste" SP. They have a disadvantage compared to Vit- and Dex Bolter (slow cast, low HP), but - depending on where you level - have less problemstrouble with SP regeneration. Agi Bolters usually get Kaupe the other 5% hit (non-dodge) too.

This build focuses on WoE with Ka and Spirit Link Skills. They get only a few to none Es skills, as those are usable in PvM only. Their most important spells are Kaite, Kaupe for support, and Bard, Dancer, and Soul Linker Spirits for buffs. The rest are chosen from the remaining Ka spells. Assassin, Rogue, and Wizard Spirits are often preferable. Their leveling methods are either leeching or supporting parties with Kaupe, Eska/Eske and the Spirit Skills.

This build is just like the normal WoE Support Soul Linker, but this one doesn't have to fear the battlefield. During field battle, this SL fights with Swordbreaker/Mailbreaker and Blast/Envenom Clip.

Kvm or BattleGround stuff needed ! (with BG in melee you can be unfrozen and with ghost element o/ , and in kvm increase your human def/max HP) SL fights with Swordbreaker[3]/Mailbreaker[3] (with statut card like magnolia/requiem/metaller)/CursedDagger and Blast/Sight Clip(or Glove[1]).

on fRO, you can also use pecopecohairband, roboeye, evolved pipe etc... note for fRO players: when you try to use a KA skill without being spirit, with 91vit you become stun indefinitely

This build uses its Ka skills to maximize melee prowess. Since only 38 skill points must be used to max out all the Ka skills, the rest can go towards Es skills or spirits. The stat layout given is deliberately basic, leaving a lot of space for personal preference and experimentation.

This build is different from it's Ka counterpart in that it uses spirit skills to buff it's friends while fighting alongside them. A few skillpoints must be invested in Ka skills (Particularly, a few levels in Kaahi) to compensate for the soul linker's weak defense. Exact spirit skills taken depend on your own party preference. Again, you'll have plenty of statpoints left over after you hit these minimum stats to distribute any way you like and experiment.

Soul Linkers are limited to Mage headgear and any that are usable by all classes except novice. However, some headgear have extra bonuses for Taekwon classes (which includes Soul Linkers):

But if you cannot afford the above headgears, there's always Apple of Archer, and the much cheaper Wizard Hat.

+3 Dex. Usually not as cheap and easy to get as "Wizard Hat", but the price is normally still reachable.

+100 MaxSP. Cheaper, easy-to-get headgear that is suitable for those who cannot afford expensive fancy headgears.

Soul Linkers can wear Sandals (and Sandals[1]), Shoes (and Shoes[1]), High Fashion Sandals[1], and all footgear usable by "all classes except novice".

Soul Linkers are limited to Mage-class armor and armor usable by "all classes except novice".

Soul Linkers can wear Hood (and Hood[1]), Muffler (and Muffler[1]), as well as Mage-class garments and those usable by "all classes except novice".

Soul Linkers can equip various accessories, such as Clip, Nile Rose, as well as the stat-boosting generic accessories such as Glove, Ring, Earring, Necklace, and of course, their "Level 90+" slotted version. The easiest option, though, is a Clip. Aside from that, there are other accessories that Soul Linkers can equip, but those mentioned above are what people usually use. If you have the money, and you are level 80 or higher, you can use Librarian Glove or Eye Stone Ring instead, which, to Linkers, are essentially a Clip with a better SP bonus.

Soul Linkers can fight unarmed, keeping the bonuses from the Sprint skill, or use Daggers and Rods. Usually, rods are to be used for Esma or supportive play styles. Most daggers are only better than fists when they're carded, especially against large enemies.

ATK+50. Adds a 50% chance of inflicting [Curse] on the target when doing a physical attack.

ATK+70. Adds a 5% chance of damaging the target's weapon when doing a physical attack.

ATK+70. Adds a 5% chance of damaging the target's armor when doing a physical attack.

Es spells are offensive magic. This type can be cast only on monsters. Casting them on players causes the skill to fail and the caster to be stunned (even in PvP/WoE conditions).

Ka spells are defensive magic. By default the caster can use this only on themself, their spouse or their child, or other Soul Linkers. Unless the user is linked with the Soul Linker Spirit, using these skills on anyone else causes them to fail and the caster to be stunned.

These skills imbue other characters with special abilities for a time depending on skill level. Each class has their own Spirit Link that can only be cast upon them.

Soul Linkers can use Concentration, Awakening and Berserk Potions, even though the in-game description does not mention it.