From iRO Wiki
(Redirected from Sin)
For a pre-Renewal version of this article, click here. 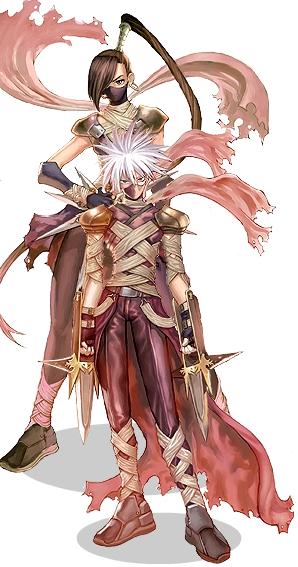 Assassins (and their transcended Assassin Cross) are able to equip a weapon in each hand and the exclusive users of Katar weapons. Assassins have a variety of damage dealing and poisoning skills. The Assassin are the only class who can walk slightly faster than any other class ingame as long as they leveled the proper skill (Thief's Improve Dodge). The Katar wielding Assassins also receive double the normal amount of critical hit rate. Therefore, whatever amount of critical rate Assassins have, it would always be doubled.

Changing into an Assassin from a Thief requires the player to complete a number of tasks:

After completing these tests, the player will be transformed into an Assassin. All this takes place inside the Assassin Guild in the Morroc Desert (moc_fild16 xx, yy).

The skills which most Assassins will get is very similar, because of the relative weakness of the poison skills, and the small number of available assassin skills:

This leaves 5~15 points to use for poison skills, depending on the level of Enchant Poison and Cloaking.

This build is very similar to that of a Dual Dagger Assassin, the difference being that they use Katars with cards that add to the CRIT rate of attacks. Even if your HIT is not high enough to hit the monster with your auto attacks, a CRIT will still land. A small amount of DEX is still necessary for skill usage, as many skills require DEX to land the hit on the monster.

There are two ways to accomplish this: a high ATK Katar (like a Jamadhar) carded with one Sidewinder Card or with a Chick Hat. It is important to note that multi slotted low ATK weapons is not effective in Renewal anymore, and it is usually best to go with the highest ATK weapon available (level 3 or 4 weapon preferred).

Note: the following information may be outdated. It may be better to use high ATK weapons instead of multiple carded weapons now. It is safer to just go with a Katar build.

Many players find that leveling AGI classes can become expensive due to the need for healing on high HIT mobs (and in renewal, many mobs have had their HIT increased drastically). There is a simple solution that wont bankrupt new players starting out with little money to spend with: Fresh Fishes. This cheap, yet viable option is a great substitute for the ever expensive Potions sold by Tool Vendors (and their weight is only 2 each). They can be bought from the Alberta Chef Assistant.

Eden Group Equipment is free and a great place to start for gear to use. The Katar is a good weapon and generally a good choice for an Assassin and their future classes' use.

Wearing shields while leveling is not necessary, unless it is for mobbing purposes.

A lot of Critical oriented Assassins choose to use the Morrigane's Equipment Set: