From iRO Wiki
(Redirected from Aco) 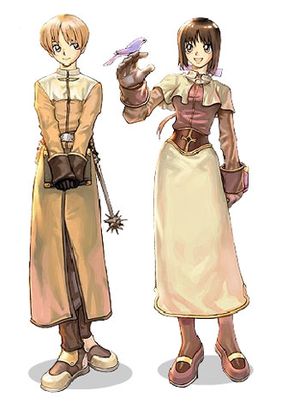 Acolytes live their lives serving the Catholic Church and following the religious teachings. They train to become selfless and devoted individuals, aiming to help all that they meet. While the main location for Acolytes, like other members, is the Church in Protera, it isn't uncommon to find Acolytes travelling with adventurers around the world, especially adventurers recruited by King Tristan III.

The religious teachings forbid Acolytes and other members of the Church from using bladed weapons. Instead, they typically carry staves and rods for casting skills that support their allies and harm their foes and maces for physical damage.

Once the Acolyte has reached a sufficient amount of training, they can choose to continue and grow in their supportive endeavors and become Priests or train physically and mentally, dealing great damage as Monks.

For the Acolyte Job Change Quest on iRO RE:Start, see the guide here.

Once the player is Job Level 10, they can go to the Prontera Church

in the northeastern corner of Prontera. The Cleric NPC is located in the first room on the right side of the hallway. Upon entering that room, the NPC can be found in the left side of the room in the northern-most corner (184, 41). Once the player has confirmed they want to become an Acolyte, they receive a Novice Mace [3] along with their job change. Once the player has Rebirthed as a High Novice and has reached Job Level 10, they can return to the Cleric NPC who will change their job to High Acolyte.

The new Izlude tutorial area offers players an additional means of changing their jobs from Novice to their chosen First Class without going through the steps listed above. Once they've completed the Criatura Academy quest line, they can go to the second floor of the Academy where job change NPCs are located. The Acolyte job change NPCs are located at the end of the hallway on the right side, just before the Principle's Office.

For support oriented builds, refer to Heal Bomb Maps for some map suggestions on leveling using "Heal" on undead monsters.

Depending on the intended Second Job (Monk or Priest), Acolytes tend to aim toward the equipment that class uses. If the player plans to become a Monk, they will more than likely want to use maces for their weapons, as Monks deal physical damage, and maces have higher ATK and ASPD than other weapons. Priests tend to be more magic-oriented and cast spells, so staves and rods are more common, which favor MATK and often give bonuses to INT and DEX. If the player intends to become a battle Priest, like Monks, they also will likely opt for maces for the higher ATK and ASPD.

In general, it is a good idea to have both a mace and a staff or rod on the character at all times and to assign hotkeys or skill slots to each weapon, to easily toggle between one or the other as needed, as some monsters are easier to kill by melee attack than with spells and vice versa. Even if the player intends to become a Monk, they shouldn't forget that their Acolyte still has access to the Heal skill and can still "Heal Bomb" undead monsters. And Acolytes intending to become Priests should also remember that they can still melee attack monsters and don't have to just rely on their spells to deal damage.

It is also highly recommended, regardless of what Second Job the player intends to choose, to equip a shield. They increase DEF, which means that the character takes less damage from monsters' attacks and can survive longer.

Other equipment choices depend on the player's desired Second Job (and beyond) and preferred build. It is better to save up for equipment that the later Jobs can use, as the player will get more use out of those items in the long run, than to buy equipment that only the Acolyte job can use.