From iRO Wiki
(Redirected from WL) 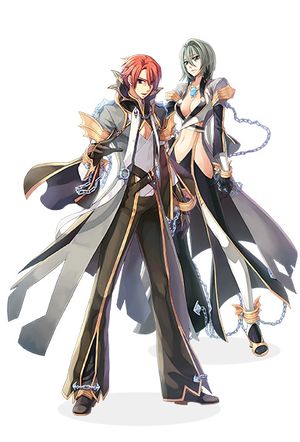 Warlocks are the advanced version of the Wizard class. Their name is often abbreviated and then referred to as just "WL". They offer two viable roles: The instant/fast cast killer and the crowd control support. Depending on how well geared a Warlock is they will be either a fallback support class for controlling mobs with Jack Frost or one of the main AoEs with Crimson Rock, Comet and Chain Lightning. The earth element tree offers great PVP capabilities with the ability to strip players of their equipment. Players also have the ability to "memorize" skills for instant casting at a later time, which can help with long cast times and reuse delays.

This test has a very bad reputation for being the hardest of the job change quests. While maybe not the hardest, it can be slightly difficult to an unprepared player. The test is basically broken down into two parts:

The first part of this test sends the player into the New World just west of Camp Midgard. It is recommended to get a friend or guildmate to help the player with this portion, as it can get very overwhelming for an undergeared player. If soloing is the only option, it is strongly recommended to bring a teleport accessory or a lot of fly wings and healing items.

For the second part, the player will be locked in a small room and pitted against monsters with very high HP that also have high damage. This part may seem challenging, but is actually quite easy if the player is prepared. Here are some tips for making this test easy:

A Quick Explanation of Spellbook/Release: The basics to playing Warlock

With the addition of new powerful spells upon job change, players will now have access to 2 spells that allow for instant casting of learned spells. These 2 spells are:

The way this new system of casting works is that a player will have to purchase spellbooks from the Geffen Mage guild (the building where you changed into a mage). Once these spells are in inventory, players can cast Reading Spellbook and choose the spells of the books they currently own to 'memorize'. What this basically does is store up the spells in the warlocks memory to 'Release' when needed at a later time with no casting bar or cooldown delay (yes this bypasses the horrible 1 minute cooldown of Comet. That is where the Release spell comes in. Players will need level 1 Release to cast the memorized spell.

These Stats can be reached at level 162 and give the player the freedom of switching between Temporal Int Boots and Temporal Dex Boots as needed.

With the leftover Stats from the following levels one can increase:

The following example is more suited for players that have access to (very) good gears:

Note: All builds have 4 free Skillpoints for High Wizard. Those can be used to increase Stormgust, Ice Wall, Quagmire or any other spell the reader might find useful.

Comet build with all elemental Spells and zero leftover Skillpoints.

Radius 3 is a must to increase spell range, while Recognized Spell increases the overall damage output.

Drain Life 4 heals for a decent ammount and can be very useful to save consumables in Nightmare Clock Tower.

Variations include leveling up Freezing Spell to be able to store more Comet.

Following this example, the player has no leftover Skillpoints.

Tetra Vortex eats up a lot of Skillpoints.

Radius 3 is a must to increase spell range, while Recognized Spell increases the overall damage output.

Following this example, the player has 1 leftover Skillpoint to distibute as he wishes.

Not getting any of the "Ultimate Spells", Comet or Tetra Vortex, leaves the player with enough Skillpoints to get a lot of nice little perks the WL Skilltree offers.

Drain Life to regain HP easily while dealing damage to a single target at the same time.

And Freezing Spell to store more Spells to use with Release.

A single Skillpoint should be invested into Hell Inferno, so the Player can use it's Burning to deal with certain enemies faster.

Following this example, the player has 1 leftover Skillpoint to distibute as he wishes.

Kaahi is a Soul Linker skill.

It uses 5*Kaahilvl sp to restore 200*Kaahilvl hp everytime the player gets hit by a normal attack.

This works even if the player is stunned!

To cast Kaahi on a Warlock without having said Warlock be married to a Soullinker, one needs a second Soullinker on another account, to link the first one with Soul Linker Spirit.

To counter the SP drain from being buffed with Kaahi, a WL needs to have learned Soul Drain as High Wizard.

Since Crimson Rock, Chain Lightning and Soul Expansion trigger Soul Drain a WL can easily level without any consumables at all.

Due to killspeed this method becomes less effective for Nightmare Clock Tower (150+ content).

The player has to do one the following:

a) WL is marrried to a Soul Linker: Just cast Kaahi on the WL.

b) WL is not marrried to a Soul Linker. The player now needs 3 accounts: 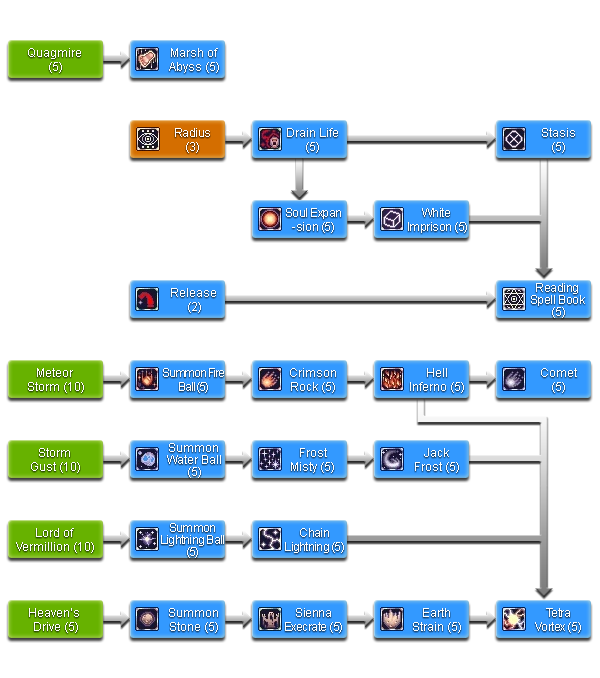