From iRO Wiki
(Redirected from RK) 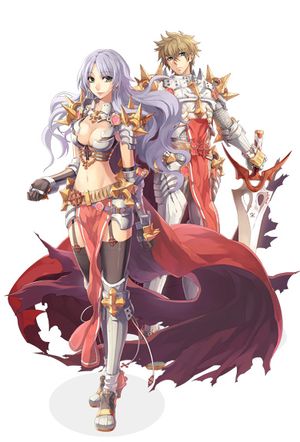 Rune Knights are the final evolution of the Knight classes. Their name is often abbreviated and referred to as "RK". They have traded in their Pecos for new dragon mounts and are ready to do some serious damage with an arsenal of new powerful attacks while also having the highest HP pool compared to other classes.

Rune Knights have a slower startup leveling-wise, but they can become one of the most versatile and powerful classes in the game. Unfortunately, they suffer from a poor skill tree layout, forcing players to have to get 22 job points to max a basic AOE leveling skill (Ignition Break), or going with a Dragon Breath build early on, which may not be very strong in the first 20-30 levels. Rune Knights aspiring to have a Dragon Breath end-game build but do not want to use a skill/stat reset may resort to being mainly a party tank for 20-30 base levels until their HP and SP pools are higher for better damage, as that is how the Dragon Breath skill formula is calculated. The upside is that Bowling Bash is one of the most powerful non-third class AOEs and can be used until level 110-120 or so, but does require a good weapon and some practice with the gutter lines. Dragon Breath ignores reductions in PVP / WoE and is one of the main killing skills, but depends on party buffs such as Magic Strings and Sacrament.

Finally, there are the the runes themselves. Players who choose the Rune Knight class are introduced to a new system of buffs and attacks in the form of rune stones. These consumables provide the user with immensely powerful buffs that range anywhere from a large increase in DEF/MDEF, potting ability, and massive damage increase. Unfortunately, creating runes consumes materials, but their sheer power makes them worth their cost. It is highly recommended that every Rune Knight should get the maximum level of Rune Mastery.

This test is very easy, but it is strongly recommended to have high DEX (70 DEX is recommended) or use a high level of Spear Dynamo for the final part due to the mobs having such high flee rate. You will be pitted up against three very powerful minibosses. You must time the use of your runes accordingly to allow yourself time to heal/get in hits.

Unfortunately, it is mediocre until around level 130+ due to requiring the player to have a high HP/SP pool and the lack of available monsters weak to the fire or water element before level 120-130. Players around level 100 will find themselves only doing 4-6k damage in poor/basic gear and 6-10k with excellent gear, and will most likely have to rely on tanking for parties until lvl 130+ to level up. At lower levels, flat SP bonuses (Ex: +250 SP) provide much more damage than gears that give a % of SP (Ex. +10% SP).

Players may find themselves having to keybind multiple weapons in order to play this build effectively. For example, switching between a weapon for damage output or one for survivability with HP regen.

While this Build is not consumable intensive, having items that boost Max HP and Max SP will differentiate the Great from the Good.

The 25% Max HP and Max SP bonus from Transcendence is a must for this build. While leveling as a Lord Knight, if the player chooses to level with 1 STR, having a sufficiently heavy spear for Clashing Spiral is crucial.

Due to Dragon Breath being locked to the Fire and Water elements, it is recommended to either learn Hundred Spears (which requires a light spear for improved damage) or Ignition Break, and have 90+ STR (for HBP bonus) for an endgame build as Hundred Spears and Ignition Break cover different elements, offering more flexibility. Dragon Breath is weak against monsters resistant / immune to the fire and water elements, or to players wearing the appropriate elemental armor in PVP / WOE.

Note: Dragon Breath and Clashing Spiral cannot be interrupted and does not require a Phen Card (or other equipment / cards that provide the effect).

The Ignition Break build tends to have higher DPS than Dragon Breath builds for leveling, especially at lower levels (100-130) when an RK's HP / SP pool is not high. Ignition Break's 2 second cooldown is cancelled when using certain skills, such as Bowling Bash. Which is why this build is often referred to as the IB+BB build. Although Ignition Break receives a 50% bonus damage when the caster is using a fire weapon, it uses the caster's weapon element. This can be advantageous when fighting mobs resistant to fire attacks, where Dragon Breath suffers. However, it is recommended to take advantage of the extra power from using a fire weapon for leveling purposes. Rune Knights can get both Dragon Breath AND Ignition Break if they wish (although they will need to gear accordingly to get the full effect of Dragon Breath), while still maxing Rune Mastery.

Chaining Bowling Bash with Ignition Break can produce high AOE DPS, but take note that Ignition Break does more damage to targets closer to the RK, which can make positioning tricky due to Bowling Bash's complicated mechanics. Using IB + BB to MVP is possible and effective as well.

Note: Although this build is viable without a heavy investment, True Seyren Windsor Card provides an important increase in damage, and therefore this build relies on approximately 3 billion zeny to unlock its potential.

With Twohand Quicken or Frenzy and the addition of the Rune Knight's Asir Rune, Rune Knights are capable of reaching maxed out ASPD quite easily. Two handed Swords are the preferred weapon of choice due to the Twohand Quicken buffs, although other weapons can be used with Frenzy. This build is HEAVILY gear dependent and benefits greatly from expensive Auto-Cast gear like 'CD In Mouth' and 'Ring of Flame Lord'.

WARNING: This build is difficult to level. This build is specialized for single target DPS (leveling post 99 is all about mob leveling). This build is also very expensive to level and is not recommended for new players.

This build is often considered a 'for fun' build, although it can reach respectable DPS with high investment. Many ASPD RKs will depend on Ignition Break as their main AOE and leveling skill. This build depends on expensive gear to limit the stat point investment in AGI. Even without the Alca Bringer, the RK class is capable of hitting 193 ASPD with even lower than 90 AGI, leaving you more points to sink into other stats. There are many Lord Knight skills which are key to maximizing your auto-attack DPS, which is why it is mandatory to rebirth into Lord Knight for this build.

These gears are suitable for any Rune Knight build. They won't be mentioned for the specific RK builds, but are sometimes the best option.

with each of the common racial resist cards.

This set is mandatory for maximum damage with Hundred Spears (and all four pieces must be worn to get the bonus damage). Can be obtained for FREE by doing Mora Village quests and earning coins. This set also compliments the Dragon Breath skills nicely due to the HP increases and possible SP enchants on it.

This set is good for players who have a lower budget but still wish to enjoy the Dragon Breath build or to have higher HP. It's a tank set to get a player started until they can make a more customized set. Recommended to wear all set pieces for the HP and SP bonus. Only downside to this set is the lack of reductions and slots to card any of the pieces. Replace the set with Variant Shoes once able to afford it.

Cards to use with weapon:

Anything that adds HP/SP, reduces after cast delay, provides leech or reduces cast time. Some options include:

With these cards depending on the situation:

Cards to use with armor:

The best weapon is probably a level 4 weapon with as many slots as possible for True Seyren Windsor Cards.

Cards to use with weapon:

Other options aside from set pieces are:

Cards to use with armor:

Cards options to use with weapon: