From iRO Wiki
(Redirected from Alch) 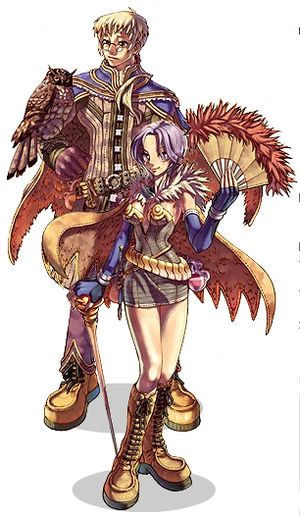 The Alchemist is a class which optimizes Potion Creation and Homunculus, as well as various other potion-related skills. They are a class which work for the benefit of their friends and strike terror into the hearts of their foes (armor).

Changing into an Alchemist from a Merchant requires the player to complete a number of tasks:

After completing these tests, the player will be transformed into an Alchemist.

This build is centered around the Cart Revolution skill for AoEing groups of monsters at once. ASPD does help Cart Revolution spam rate, especially when pushing monsters against walls. Mammonite still provides high single target damage.

The AGI build is is usually recommended for newer players without funds. They have high ASPD and FLEE for quick single target killing, so it uses minimal HP / SP Healing Items. Their main method of attack is melee-ing single monsters, and sometimes utilize autocast gear. Alchemists do not have skills that increase flee rate (like a Thief's Improve Dodge, so it is recommended to use at least SOME sort of FLEE gear (such as Falcon Muffler or Whisper carded garment).

This build is for rich players with a lot of funds that want to level faster.

This has one of the highest success rates for Potion Creation, but requires a lot of leeching or a lot of AFKing with a Homunculus. LUK may be preferable to DEX as most Gypsies and Minstrels have high DEX but do not have any LUK. Thus, when Marionette Control is used with this build, the Alchemist will receive a significant boost in DEX from the Gypsy or Minstrel, and the Alchemist's own LUK will further increase success rates for brewing.

Eden Group Equipment is free and a great place to start for gear to use. The One Handed Sword is a good weapon and generally a good choice for an Alchemist and their future classes' use.

The weapon used is primarily based upon one's build. For example, an Alchemist prioritizing AGI and ASPD should generally use Swords. Those preferring to maximize damage are better suited with Axes. The following is a listing of the most common weapons and why they are beneficial:

Swords are some of the most common among Alchemists primarily due to the relatively low ASPD delay as well as their moderate ATK. However, the player will be unable to benefit from having a Blacksmith partner, which is relatively rare. Also, because of the skill Axe Mastery it is evident that one will be able to bring out optimal damage from an Axe. However, Axes have a large ASPD delay, which means they swing slow but hard. On the positive side, players using Axes can not only benefit from Axe Mastery but also a Blacksmith partner.

The Homunculus is a pet that kills, supports, and does everything for its master. An Embryo, from which a Homunculus will be born, can be created via Prepare Potion with the following materials purchasable from the Al de Baran Material Seller, in the Alchemist guild

Once an Embryo has been created (or purchased from another player), use the skill Call Homunculus to receive 1 of 4 types of Homunculus. The Homunculus received is random, and each type has two sprite variations. Much like Cute Pets, Homunculi need to be fed or they will leave their owner:

Below are listed the skills that are unique to the Alchemist class. For more information about Merchant skills, click here.

The Alchemist Skill Quests give Alchemists access to the Homunculus skill tree by granting the Bioethics skill. In addition, it allows them to obtain a new Creation Guide to create Elemental Resistance Potions using their Prepare Potion skill.

These skills were part of the original homunculus skill tree:

The Levels in which you receive a certain bonus: