From iRO Wiki
(Redirected from Blackmisth) 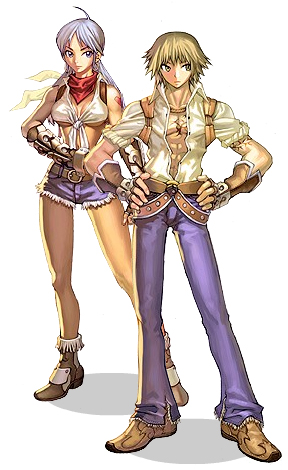 Easily the most powerful of all the 2nd classes, the Blacksmiths sport damage equal to that of the trans 2nd classes(except their own trans class of course). Their only weakness lies in the fact that they only have 1 multitarget AoE spell (Cart Revolution) that has knockback and limited range, making it hard to target with. As a single target killer though, it is no doubt that this class shines bright as the leading killer. A Battle Blacksmith's main skills revolve around the theme of self-buffing to increase damage. The main offensive skills are Mammonite and Cart Revolution, which both can be learned as a Merchant. The only drawback to these self buffs is that the skill Power Thrust has the chance of breaking party members weapons (bows are the most susceptible to this), and thus it is recommended that the blacksmith always carry Steel, Iron, and Rough Oridecon with them at all times to repair party members weapons.

Note: In previous versions of Ragnarok, STR was a key defining stat for the blacksmith class, but due to nerfs on STR bonus's in Renewal mechanics, this is no longer true (still a good option in Classic versions of the game though). Pumping obscene amounts of STR is no longer wise as its a waste of stats that can be placed into better areas for more dmg output or survivability. Blacksmiths will get to makeup for this severe DPS loss when they change to Mastersmith and learn Improved Power Thrust. This nerf was Gravitys way of balancing the class with all of the new weapon options available as well as the adjustments to monsters HP (blacksmiths would be killing everything in 2-3 hits otherwise).

For more information about what the 'Create Elemental Converter's' do, see here:

Changing into a Blacksmith from a Merchant requires the player to complete a number of tasks:

After completing these tests, the player will be transformed into a Blacksmith. This mostly takes place in Einbroch.

This build is centered around the Cart Revolution skill for AoEing groups of monsters at once. Blacksmiths can also play as tank/puller for parties, especially if switching to a Fortune Sword and Shields with Racial Reduction Cards. Skin Tempering adds an extra 5% Neutral reduction, which is helpful for stacking with Raydric Card and other Neutral resist gear. ASPD does help Cart Revolution spam rate, especially when pushing monsters against walls. Hammer Fall is useful for stunning monsters to temporarily disable them. Mammonite still provides high single target damage.

The AGI build is is usually recommended for newer players without funds. They have high ASPD and FLEE for quick single target killing, so it uses minimal HP / SP Healing Items. Their main method of attack is melee-ing single monsters with Adrenaline Rush and other damage boosting buffs active. Blacksmiths do not have skills that increase flee rate (like a Thief's Improve Dodge, so it is recommended to use at least SOME sort of FLEE gear (such as Falcon Muffler or Whisper carded garment).

How to make a Pure Forger:

Level as with a battle build. When reaching the max desired level, use stat reset to change stats to the desired forging stats. This is by far the easiest way to achieve a forgesmith in a reasonable amount of time. Otherwise the player will have to self leech themselves, since the forgesmith build has bad survivability and poor damage output.

Warning: This build is no longer viable in Ragnarok Online due to the availability of better weapons now, and the fact that a player can use Elemental Converters on their weapon to make it whatever element they want. Players can also use an alt account with a Sage to endow themselves for up to 30 minutes. Elemental converters open up the option of making a carded weapon AND having element bonus. This is a far superior option to just using a forged elemental weapon. Players will find it extremely difficult to make money with a pure forger now, unless selling Very Very Strong Level 3 weapons and thus it is NOT recommended to attempt this build.

If players truely desire to follow the forging path, then it is STRONGLY recommended to just make a battlesmith and transcend to Mastersmith, since Mastersmiths have higher success rate due to higher job level, as well as the Upgrade Weapon ability, which is really the major source of income for a forgesmith. The majority of forgesmiths nowadays only use the Weapon Upgrade ability and have given up on forging elemental weapons.

Eden Group Equipment is free and a great place to start for gear to use. The Axe is a good weapon and generally a good choice for a Blacksmith and their future classes' use.

The Blacksmith Spirit enables the use of

The Levels in which you receive a certain bonus.